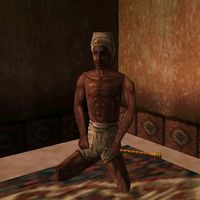 Avik is a Redguard snake charmer in Stros M'Kai. In order to speak with him, you must offer a 1 gold tip. Attempting to enter conversation without a tip prompts Cyrus to comment, "Hmm. He looks a little preoccupied."

He is aware of the Yokudans, Saban and Coyle, living north of town and will tell you about their predicament. Saban's recently murdered son, Hayle, used to listen to him play music and charm snakes. You must talk to Avik in order to gain Coyle's trust.

As a retired member of the Mage's Guild, Avik is friends with Joto. Before the Imperials arrested Joto, he kept Avik current with guild affairs.

"Thank you, son. You are very generous."

"Thank you. What would you like to hear next?"
"Not just yet, my friend. I need a minute."

"Change you back?! Did you say that? Is that you, Cyrus! Oh, of course, the vest! Did you go threatening Jaganvir?
"I recognize his sorcery. My own, however, is not so vulgar as this, and I've no skill to counteract it. You must seek out another member of the guild to help you."

"I'm looking for my sister, Iszara. Do you know her?"
"The name sounds familiar, son, but I'm afraid I can't help you.
"Not many young people have an ear for the snake-songs anymore."

(Disappears when "Restless League" is unlocked)

"Are you familiar with a group called the Restless League?"
"Can't say that I am, but I mostly keep to myself. With the Yokudans banned from Stros M'Kai, I don't have many friends here in town.
"Probably have to pack up and leave myself, soon."

"How has Stros M'Kai fared under Imperial rule?"
"Things have gone to pot, I don't care who knows it. Murder in the streets, where will it all end, tell me that? Where will it end?"

"You play very well."
"Thank you, son. No one visits me since those Imperial devils murdered that Yokudan lad. That's right, Imperial devils! And I don't care who knows it!"

"Imperial troops have murdered people in Stros M'Kai?"
"Ach, when they came ashore, it was fire and sword in the Old Quarter. At least then they could pretend they were fighting the Crown die-hards.
"But killing that innocent Yokudan boy... if I was twenty years younger, I'd make someone pay!"

"Is the Old Quarter completely destroyed?"
"Might as well be. It was sealed off while the Imperials searched every house for 'Crown loyalists'. Nothing but a ghost town now."

"Tell me about this murdered boy."
"His name was Hayle, poor lad. His family is still camped outside the city, waiting to finish his burial ritual.
"Yokudans were never well liked around here, but Governor Richton went too far."

"You miss Hayle, don't you?"
"Used to love to listen to me play. One of the few people around here who did. Appropriate, I suppose, for one born under the sign of the Serpent."

"Yes,unfortunately [sic] the Yokudans have always been treated as outsiders, all over Hammerfell."
"A senseless prejudice, since their religion harks back to the earliest Redguard traditions.
"But our new Governor has done much worse than simply overcharge them for flour!"

"What did the Governor do to the Yokudans?"
"Murdered young Hayle! Then branded the rest of them traitors and ordered them to leave Stros M'Kai!
"Yokudans mixed up with Redguard politics -- a preposterous notion!"

"Why do you say that?"
"You haven't spent much time in Hammerfell, have you son?"
"No. I was born in Sentinel, but left Hammerfell when I was... very young. I haven't been back in years."
"I thought so -- you've picked up a bit of an accent, west High Rock, am I right? Well, as I was saying, the feeling against the Yokudans runs deeper than politics, even in a civil war.
"Neither side ever stooped to allow Yokudans to join their ranks.
"Even the Restless League was too good for them! But all that's over now. Redguard pride has made us all slaves of the Emperor."
"I thought you'd never heard of the Restless League."
"No one pays any attention to an old snake-charmer ranting against the Empire. But the League... now there is a dangerous subject of conversation... for anyone.
"Including young Redguard swordsmen with a mercenary air."

"Where is the Yokudan camp?"
"I'm not sure. Outside the city somewhere, watching over Hayle's grave. His poor mother is beside herself with grief."

"Tell me what you know of this Restless League."
"If I was as wise as my years, I would hold my tongue and bid you good day.
"But you're no Imperial spy, and nothing like the League bullyboys that came around after Hayle's murder."

"I ran into a couple of them myself. On my way into town. Pleasant enough fellows, although they talked too much. What did they want with you?"
"They were asking questions about some woman. It was none of my concern and I didn't want to give his poor mother any more trouble, so I told them nothing."

If he knows about Iszara:

"Say, now I remember why your sister's name sounded so familiar -- she was the one they were looking for."

"Was this woman named Iszara, perhaps?"
"Yes, I think that's right. Why?"
"She's my sister.
"She seems to have disappeared."
"Oh dear. I am sorry to hear that."

"You imply there was something you could have told these Leaguesmen. Mind telling me?"
"Well... Iszara met Hayle here and they left together -- the day he died. At the time, I thought it was just a romantic rendezvous, nothing to do with his murder.
"But then the League came sniffing around. I can't imagine what it's all about, but I saw no use in adding the League to the Yokudans' troubles."

"His mother is understandably upset at her son's death."
"Yes, but it's not just that. Saban has not yet completed the burial ritual, although the lad has been in the ground for weeks."

"The sign of the Serpent? Part of Yokudan religion?"
"The star-sign of his birth. Yokudans believe the stars guide your destiny, from birth to death and beyond."

"I'm not familiar with Yokudan religion. Do they have lengthy burial rituals?"
"It's more serious than that, I'm afraid. His mother, Saban, needs to counteract the soul snare that N'Gasta has laid over the island."

"Soul snare? What do you mean?"
"Now that the Prince is dead, that foul worm has woven a magical snare across Stros M'Kai to feed his hunger for souls.
"Unless you are buried in consecrated ground, your soul will go straight to N'Gasta if you die. This is why Saban still fears for her murdered son."

"Tell me more of N'Gasta."
"While Prince A'tor was alive, a name to frighten children, little more.
"But our new Imperial master has allowed the necromancer's dread power to spread unchecked until his soul snare threatens us all."

"Why did Prince A'tor allow N'Gasta to stay on Stros M'Kai?"
"I don't know. A'tor's father, Thassad, first allowed N'Gasta to occupy the old wizard's tower, but back then, he seemed harmless enough.
"The Mage's Guild complained of unsanctioned research, but they had little influence with old Thassad. The civil war kept A'tor occupied until his untimely death."

"You seem to know a lot about the Mage's Guild."
"Yes, in fact I am a member, although you wouldn't think it to look at me, would you? I'm retired now, but my friend Joto kept me up to date on guild politics.
"Until he was arrested by those Imperial devils, that is."

"Why was your friend Joto arrested?"
"Do they need a reason? One day soldiers came for him, and he's been rotting in jail ever since."

"Does the Mage's Guild have much influence in Stros M'Kai?"
"No more! Archmage Voa was a Crown, A'tor's right hand, but both perished in the battle of Stros M'Kai. Jaganvir is an unworthy successor to the Archmage's chair, if you ask me."

"Archmage Voa was loyal to the Prince, then."
"The Prince's chief advisor. But his replacement Jaganvir, is a disgrace to A'tor's memory."

"Jaganvir is the new Archmage?"
"Yes, a spineless toad of a man, a perfect lackey to the Governor's every whim. Still, a mage of formidable power, whatever his personal failings."

(Unlocked by "Prince A'tor" after the quest Contact the League)

"What can you tell me about soulgems? Did you know that Prince A'tor's soul was placed into a soulgem just prior to his death?"
"I'm afraid I can't help you. I've no skill to counteract that sorcery. You must seek out another member of the guild to help you."

"The Jail? Where's that?"
"Up near the Palace. They won't let anyone in to see the prisoners, I've already tried.
"I guess I should be grateful they didn't just kill him, eh? Murdering devils!"

Avik was supposed to have a dialogue topic probably called "Snake Songs" with the following lines:

"Your snake seems to appreciate them."
"There's nothing to it, really. Old Slinky, he just loves to dance."

Another greeting, after leaving the Jail:

"Cyrus! You managed to break the spell!"
"Thanks to your friend, Joto ."

There is also an unnamed topic informing Avik about Joto's death:

"I'm afraid Joto didn't make it. I tried to rescue him, but the Imperials--"
"This news...comes as no surprise. Who will save Stros M'Kai?"
"That's my job.
"First things first. I still need to find my sister."