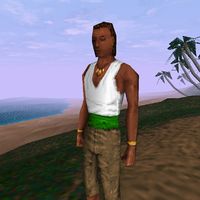 Coyle is a 16-year-old Yokudan boy found in the camp north of town. He is Saban's son and the younger brother of Hayle, who was murdered by the city guards. Saban is only fluent in Yoku, so Coyle acts as a translator when you speak to her.

Until you learn about Hayle's death from Avik, Coyle will be unhappy with your presence and ask you to leave. Once you become friends, he reveals his wish to join the Restless League and that Iszara was with Hayle when he was murdered. He still won't let you talk to his mother; you must know how to arrange the starstones and save Hayle's soul first. He is surprised that Cyrus isn't familiar with guardians and charges and will recite a rhyme for each guardian and its three charges.

When you ask Saban to restore Prince A'tor, Cyrus will tell Coyle to go get the League. He arrives at the Temple of Arkay with the League, and helps his mother communicate what she needs for the ritual.

Sword of Crown
Coyle returns to the mainland with the Restless League, standing at the bow of Basil's boat. He infiltrates the town with them and arrives at the temple, where he translates Saban's request for the soul gem and Voa's ring. Later, he wishes to go with Cyrus to the Palace, but is told to secure the harbor with the League instead.

"Where'd you come from?"

"Leave us alone! We have nothing!"

"Looking for something?"
"Well? Speak up, stranger."

"No swordplay here, Cyrus. Go down the beach, please?"

"Cyrus, are you sure you know what you're doing?"

"Yeah, I think I've figured this out."

"No. I'm not really sure."
"Please, Cyrus. If she stops with the stones placed incorrectly, Hayle's soul will be taken by the necromancer's snare."
"You're right, I better leave these alone."

Before answering yes to "Serpent's Path":

After quest Save Hayle's Soul:

Otherwise, you have agreed to help the Yokudans:

"Hello,Coyle [sic]."
"Have you figured out how to set my brother's soul free?"

If you have used the telescope to learn the Serpent's path:

"Change you back? In [sic] what, you ugly thing? Find someone else to work that magic for you!"

"Mother can't help you with this, and neither can I, Cyrus. You have to find a wizard from the guild!"

"I can't understand any of that, Cyrus!"
"Yes, yes, but what does it all mean?"
"You'll have to find someone else to help you."

"I wonder if you know my sister --"
"Why would I know your sister? Why don't you just go back to the city where you belong?"

"Coyle, do you know my sister Iszara?"
"She was your sister?! My mother blames Iszara for getting Hayle killed, but I know your sister did her best to save him.
"She fought off ten soldiers all by herself! I'm going to join the League and fight the Empire, as soon as my mother's safe."

"Have you ever heard of the Restless League?"
"Why would I tell you if I had? I don't need them, I'll fight the Empire all by myself if I have to!"

"Do you know anything about the Restless League?"
"Sure! They're the bravest Redguards of them all. They'll never surrender to the Empire.
"They even blew up the Governor's ship, right in the harbor! Do you know how I can find them?"
"Afraid not. I was hoping you could tell me."
"Naw. Hayle said they'd never let a Yokudan join, but why not?
"I figure they need all the men they can get now, and I'm a pretty good swordsman myself, you know."

(Unlocked if not friends)

"Is that your mother over there? Is she all right?"
"Go away! Leave her alone. We don't need your help. I can take care of her just fine. Leave us alone!"

(Unlocked by "League" if not friends)

"You sure do seem to hate the Empire."
"They killed my brother and I'm going to make them pay!"

(Unlocked by "Fight the Empire" if not friends)

"Who killed your brother? Imperial soldiers?"
"What do you care anyway? I don't need your help."

"I've heard about your brother being killed by the soldiers. I'm sorry."
"Thanks."
"Care to talk about it?"
"It's just hard, trying to take care of my mother, with Hayle being killed and we're not allowed in the city and everyone else leaving.
"And now its [sic] just the two of us and I don't know what we're going to do. I'm Coyle, by the way."
"I'm Cyrus. Again, I'm sorry about your troubles."

Is Your Mother All Right?[edit]

"What is your mother doing? Is she all right?"
"Please don't disturb her, Cyrus. If she doesn't keep up the song of passage, Hayle's soul will go to the necromancer!"

"Are you and your mother the only Yokudans on the island?"
"We're all that's left. The day after we buried Hayle, the Governor banned all Yokudans from the city. Called us all traitors!
"So everyone else took passage to the mainland, except we couldn't leave on account of the necromancer trying to steal Hayle's soul!"

(Unlocked by "Iszara" if friends)

If Avik: "Told Them Nothing":

"Avik told me that he saw Iszara and Hayle together on the day he was killed."
"Avik, the snake-man! Hayle liked him. He was always nice to us."

"Slow down, Coyle. Are you saying Iszara knew your brother?"
"I guess so."

"She brought Hayle into camp that day, all bleeding. But I'd never seen her before.
"She tried to explain what happened, but mother wouldn't listen, just screamed at her and told her never to come back."
"So you don't know why she was with your brother?"
"I guess the soldiers attacked them on the way here, but I don't know why. Hayle was never in trouble with anyone before."

Was Hayle in the League?[edit]

"Could Hayle have been a member of the League?"
"No. He used to laugh at me when I said I wanted to join.
"Said I didn't understand the way the world worked yet, I was too young. But I'll be seventeen in three months!"

(Unlocked by "Iszara" if friends)

"Do you know how to contact the Restless League?"
"Well, no. But I'll find out."

(Unlocked by "Is Your Mother All Right?" or "Yokudans")

"Why would the necromancer want to steal Hayle's soul?"
"Well, not his soul specifically. The whole island is trapped in his evil soul snare, that's what mother said.
"Anyone who dies without the proper ritual, their soul goes into his tower and he adds them to his army of undead!"

(Unlocked by "Is Your Mother All Right?", "Necromancer", Avik: "Burial Ritual", or Trithik: "Soul Snare" if friends)

"I'm surprised your mother is able to protect Hayle from such a powerful necromancer."
"You shouldn't be! My mother is a powerful witch, the witchmother of our whole tribe!
"If Hayle hadn't been born under the sign of the Serpent, she could have passed his soul through the necromancer's web easily."

"Where is this necromancer's tower?"
"Cyrus! You don't want to go there! The necromancer kills anyone who trespasses in his tower, and steals their soul!"

"I'm surprised the whole island isn't crawling with the living dead, with all the fighting that's gone on here."
"Well, the city folk have their temple to save them from the necromancer's snare. But we don't believe that way.
"Mother needs to set the starstones to show Hayle the proper way to the other side, but she hasn't been able to foretell the Serpent's passage this season."

(Unlocked by "Proper Ritual", "Serpent", or "Song of Passage")

"Are those the starstones over there?"
"That's right, Cyrus. Normally it would be simple, but Hayle was born under the sign of the Serpent, and the Serpent's path can't be predicted."

"This Serpent -- one of the constellations?"
"Yes. The other twelve follow the circles of heaven, guardians and charges, but the Serpent respects no master.
"It moves across the heavens, threatening the other constellations in its path.
"The only way to guide Hayle's soul through the necromancer's snare is to place the starstones in the position of the Serpent's head and tail --
"But there's no way to predict the Serpent's path."

"I never paid much attention in astronomy class. Guardians and charges?"
"Gosh Cyrus, everyone knows the three guardians each protect three charges in their own circle of heaven.
"Didn't you learn the rhyme? Strong Warrior charges... wise Mage orders... clever Thief watches."
"That does sound familiar."

"Sing me the verse about the Warrior."
"Strong Warrior charges... Steed prancing... Lady dancing... Lord advancing... through the night."

"How did the verse about the Thief go again?"
"Clever Thief watches... Lover sighing... Shadow lying... Tow'r defying... Through the night."

(Unlocked by "Is Your Mother All Right?")

"So Hayle's soul has not yet left this world for the next?"
"No, mother's song keeps it safe here until she can figure out the proper placement of the starstones.
"If she stops with the stones placed incorrectly, Hayle's soul will be taken by the necromancer's snare."

"If there's no way of predicting the Serpent's path, how can your mother ever complete the ritual?"
"I don't know. I want to help, but I don't know anything about the stars.
"All mother can do is continue the song of passage to keep Hayle's soul from straying. Cyrus, can you help us?"

"I'll do what I can, Coyle. Don't worry, you can count on me."
"Thanks Cyrus. Please hurry. I don't know how much longer my mother can keep up the song."

"I wish I could, son, but I don't know anything about stars or souls. I'm sorry."
"I understand. You have your own problems. Don't worry, we'll be fine."