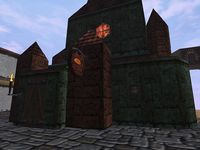 The Mage's Guild is a guildhall located in Stros M'Kai east of the Temple of Arkay. The current Archmage is Jaganvir, who replaced Voa after he died in the Battle of Stros M'Kai. Before you contact the League, Jaganvir will be outside his study room about two-thirds of the time; otherwise, he is behind the door and will still respond if you knock on it. Falicia, an Apprentice, is the only other member in the guildhall and she sells potions at the shop counter. Members outside the guildhall include Joto, an Acolyte, who was thrown in the Jail, and Avik, though he is retired. Falicia says the guildhall was chartered in 2E 638, 226 years before Cyrus arrived on Stros M'Kai.

The Mage's Guild has three entrances, in the north, east, and south. The door on the north side is the main entrance and the east door is locked until you open it from the inside. Another door, presumably a back door to Jaganvir's room, is always locked. There is a partially opened door on the left as you enter, with a keep out poster on it. It will open more if you walk through it, revealing a small room which contains a chest and some broken objects on a table. When you examine the chest, Cyrus will say, "It's empty. Somebody's really been through this place." This is the room where you can unlock the east entrance.

Scattered throughout the first floor are various items. Lich dust is on the shop counter, Hist sap, amber, and Orc's blood are on the right bookshelf, a crystal ball and a unicorn's horn are on the small table next to the bookshelves, and ectoplasm, spider's milk, pig's sac, and a salamander are on the left bookshelf. Out of the four base potions, only the Orc's blood can be examined; none of the items can be picked up.

If you examine the Orc's blood, Cyrus says, "Sure smells like Orc's blood." Examining the crystal ball, he will say, "Huh. What's a wizard without a crystal ball." If you look at the books on either shelf, he comments, "Volumes on the art of magick. I would never have the patience." Finally, looking at the book on the stand, he will say, "Hmmm. Text on potions. Says here that Orc's blood mixed with pig's sac provides great strength." This combination actually works, but you must get the Orc's blood from the alchemist's shack west of town or from N'Gasta's Tower.

Upstairs, there is a balcony surrounding a pendulum that swings back and forth from the center of the ceiling. Most notably, a magic pool can be found in a small alcove on the side opposite the stairs. If you look into the pool, three different visions will appear: the future (himself as A'tor), the past (Cyrus killing Hakan, Iszara's husband), and old friends long gone (his mercenary crew).