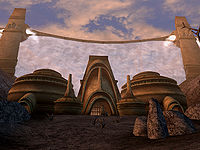 Ghostgate was the main gateway through the ancient Ghostfence artifact to the Red Mountain region, which prevented monsters affected by The Blight from leaving. Ghostgate housed a large Tribunal Temple and contingents of both Buoyant Armigers and Ordinators. The two towers of Ghostgate, called Dusk (west) and Dawn (east), were constructed alongside the Ghostfence after many failed campaigns to defeat Dagoth Ur following his 2E 882 reawakening.[1]

There was a route off the foyada leading up to the Ghostfence that would have taken one to Ald'ruhn, which rose up to the Ghostfence briefly, so you could have peered through at the quaint, curious and homicidal inhabitants of the Red Mountain region, before dropping south and skirting the Daedric shrine of Ramimilk as it turned west again. Alternatively, one could have simply backtracked down the Foyada Mamaea until they reached the turnoff to Buckmoth Legion Fort and Balmora.

According to an annal of the Oblivion Crisis, the Daedra led a siege on Ghostgate after the destruction of Ald'ruhn.[UOL 1] The Dunmer's prayers to Vivec and the Nerevarine went unanswered, but the outcome of the siege was never revealed.