Guar are the primary domesticated herd animal of Morrowind. Some varieties of guar can also be used as mounts or kept as pets. They are initially passive, but will attack if provoked.

Guar can be found in the wild in both mainland Morrowind and Black Marsh. Domesticated Guar mounts can also be seen in large herd of wild guar is located west of Emberflint Mine in Stonefalls. 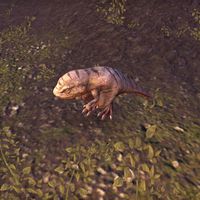 There is a friendly Pony Guar simply called Guar at the furnisher in Dhalmora.

This Elder Scrolls Online-related article is a stub. You can help by expanding it.
Retrieved from "https://en.uesp.net/w/index.php?title=Online:Guar&oldid=2567489"
Categories:
Hidden categories: