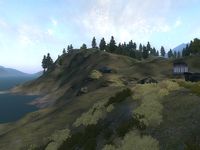 The Gold Coast, also called the Strident Coast,[1][2] makes up the western coastline of Cyrodiil, bounded by the Brena River to the north and the Strid to the south.[3] Aside from the occasional farmlands, the main feature of the region is Anvil, a major port city. Other historical settlements in the area include Crowhaven, Garlas Malatar, Kvatch, and Sutch.[4]

The Cove of the Guiding Light is an isolated cove along region's the northern coast, named for the great beacon of Meridia that once shone above Garlas Malatar and served as a major landmark for sailors prior to its extinguishment after the Alessian Slave Rebellion.[5][6]

The Gold Coast was once dominated by Ayleid settlements, which were later reduced to broken marble and subterranean dangers after the First Era.[2] The Cyro-Nords were determined to conquer the frontier, their primitive ferocity preferring bloody engagement and plunder over magic and the need for industry. They soon captured the Nedic port-cities of the Strident Coast, becoming known as the "Westerners" (and later Colovians), embarking on voyages from the Abecean Sea to colonize new lands.[1]

During Varen's Rebellion, the rebels built a stone wall known as Varen's Wall to separate the Gold Coast from the Colovian Highlands and thereby protect the cities of Anvil and Kvatch from retribution by the Longhouse Emperors. This wall isolated the Gold Coast from much of the chaos of the later Alliance War, though Anvil was captured by a group of pirates known as the Red Sails. Their leader, Fortunata ap Dugal, named herself governor of the city and proclaimed it a free port. She later claimed dominion over the whole of the Gold Coast, including Kvatch, and declared it to be an independent state. Kvatch's loyalty remained with the Empire of Cyrodiil, however, and it became locked in a struggle with Anvil for control of the region.

By the time of the Tiber Wars and the formation of the Third Empire, no trace remained of Varen's Wall and the area had been reincorporated into Cyrodiil, where it remained well into the Fourth Era. Anvil was besieged by the Aldmeri Dominion early on in the Great War, and fell in 4E 172. The city was returned to the Empire when the war ended three years later.