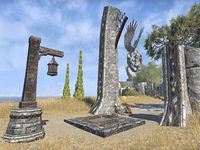 Depths of Malatar is a group dungeon on the Gold Coast. 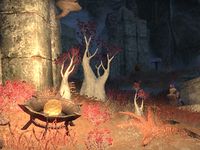 It's part of the Wrathstone dungeon pack DLC, along with Frostvault. It is located beneath the Ayleid ruins of Garlas Malatar, connected to the sunken ruins of Fort Mistwatch. The ruins are occupied by followers of Meridia who have devoted their very life and essence to keeping one half of the Wrathstone Tablet hidden deep within.

An unlikely partnership with the spirit of her treacherous ex-husband, Quintus Verres, leads the acclaimed relic hunter Tharrayya to the wreckage of an Imperial fort built to plunder Ayleid ruins on the Gold Coast. Believed to be abandoned after its destruction in an unnamed calamity, Tharayya’s search reveals a terrible secret—the Imperials never left. With your help, Tharayya hopes to overcome the unnatural guardians protecting the legendary artifact that brought the Imperials to Garlas Malatar, and to ruin.

Hard Mode is only available in the Veteran version of the Depths of Malatar. When you get to the final boss fight against the Symphony of Blades, you have the option to burn the Dictates of the Lady of Light:

<This orderly pile of papers define proper supplication and worship rituals for proper veneration of Meridia. Each page is meticulously written in a precise hand with every letter and line in perfect alignment.>
<Torch and scatter Meridia's sacred words.>

Picking up the Pieces and Unearthing Garlas Malatar are located atop crates within the entrance of the dungeon. The first room in the fort proper contains two Purified Retainers and two Purified Orderlies. There are several containers (including one backpack) and provisioning ingredients strewn throughout. Up ahead, you'll hear several purified soldiers talking about a creature up ahead that has been eating their kin. The soldiers are trying to devise a plan to purge the creature. The group in the hallway consists of two Retainers, one Orderly, one Oppressor and one Harrier. This hallway is lined with bookshelves and the occasional table, one of which has an alchemy bottle on it. There is also one backpack in the hallway.

The door up ahead leads to the fort's storage room, where the beast the soldiers were talking about resides. You'll need to face The Scavenging Maw before you can proceed.

The Frostbitten Journal is located in the Weeping Woman's arena.