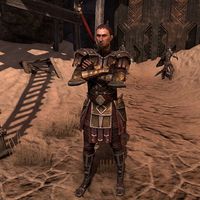 Quintus Verres is an Imperial leading a group of treasure hunters found in the Dwemer ruins of Volenfell. Prior to that, he was the husband of Tharayya, a Redguard scholar doing research on the ruins. When she asked him to return and help her in her excavations, he left her to take up treasure hunting instead.

He wears Imperial Style heavy armor and fights using a Dwarven battleaxe, using various two-handed attacks. When fought, he has a chance to drop Quintus' Exploding Staff. Around halfway through the fight, he switches to a flame staff, and towards the end of the fight, he awakens the Monstrous Gargoyle. It is likely that he will be killed before the gargoyle (who crushes him regardless if he's still alive), but even so, the gargoyle must be finished off as well.

His spirit later reappears in the Depths of Malatar, reluctantly helping Tharayya from a Pneumaria Chamber. Later on during the fight with King Narilmor, he will escape and Tharayya will attempt to capture him again. 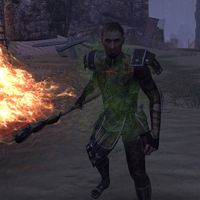 Quintus with the Rod of Kravari 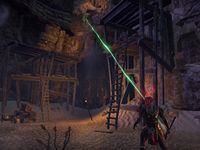 He will initially be in front atop the scaffolding in front of a Dwemer door, and when you reach him he will say:

"You got past my men. Did Tharayya put you up to this? She's still out there, isn't she? Kill these fools."

After defeating the rest of his treasure hunters, he will flip down from the scaffolding to fight, saying:

"Pathetic! I'll have to do this myself!"

He must then be killed to recover Tharayya's notes and progress through the quest. Around halfway through the fight, he will swap out his sword for a flame staff, and say the following afterwards:

"You're tougher than I thought, but let's see how you handle this."
"Here it is. Cower before the Rod of Kravari!"
"This has more kick than I remembered."
"By the Eight!"
"There's so much fire! Maybe this wasn't such a good idea!"

Late in the fight, he will cast a green beam at the Monstrous Gargoyle to activate it, saying:

"Awaken, my darling! I need you to wake and smash this rabble to pieces!"

However, if he manages to defeat you, he will exclaim triumphantly:

"Your bodyguards are dead, Tharayya! Where are you?" 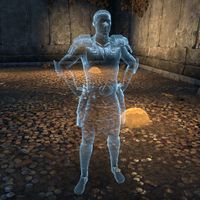 Now contained in a Pneumaria Chamber, Tharayya will speak to Quintus' spirit at the entrance of the Depths of Malatar:

Tharayya: "Your notes said abandoned, as in no one left alive inside."
Quintus Verres: "Take it to the Imperial Census."
Tharayya: "Due diligence, Quintus. It's why I'm alive an [sic] you're—hold on, we have company."

After defeating the Scavenging Maw:

Tharayya: "Daedra. A parting gift from the Ayleids?"
Quintus Verres: "You always did have a flair for stating the obvious."
Tharayya: "When I want to be wrong, I'll ask for your opinion."

At the point where you reach the Wrathstone, Tharayya and Quintus will talk:

Tharayya: "A shrine? Why would the Imperials build this?"
Quintus Verres: "Who cares? What matters is they found the Wrathstone. It's right there for the taking."
Tharayya: "Imperials aren't known for their traps, but … looks clear."
Tharayya: "Trap free, for once." [She takes the piece of the Wrathstone]
King Narilmor: "That was never meant for impure hands! It will not leave my care!" [He causes a cave in, destroying the shrine and forcing everyone into the ruins below]
King Narilmor: "Submit to her will. It is the only way."
Tharayya: "Over here! I'm alive!"
Quintus Verres: "Unfortunately."

After killing The Weeping Woman:

Quintus Verres: "Your friends are skilled explorers, Tharayya. They've discovered a woman more frigid than you. I didn't think it was possible."
Tharayya: "Shut up, Quintus."
Quintus Verres: "Case in point."
Tharayya: "This architecture is definitely Ayleid. We're on the right path. Let's explore further."

Upon entering the room with the Dark Orb, King Naromil seals you in with it. Tharayya and Quintus will have commentary on the orbs as Aurorans emerge from them:

Tharayya: "That dark orb must be the heart of this trap, try to break it!"
Quintus Verres: "Brilliant revelation."

After destroying the Dark Orb:

Quintus Verres: "Look at it all. I should have let you have Volenfell."
Tharayya: "And rob me of the satisfaction of watching you get yourself killed?"
Tharayya: "You'd have wound up like the rest of this sorry lot. Maybe sorrier. Not even the light of Meridia could improve your complexion."
Tharayya: "What is her interest here?" 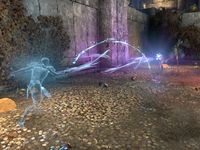 Tharayya: "Feel that? A chill breeze. We must be nearing an exit!"
King Narilmor: "Unclean!" [He casts a spell towards Tharayya]
Tharayya: "Ah! The Pneumeria Chamber!"
Quintus Verres: "Finally! Free!"
Tharayya: "Damn it! Quintus, get back here!"
King Narilmor: "You defy our Lady of Light and desecrate her domain with the undead! I will bleach your souls free of all you ever were!"

During the fight, if you don't heal Tharayya, she can lose a spat with Quintus. He will then empower one of the clones that King Narilmor summons: