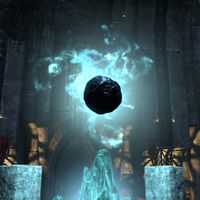 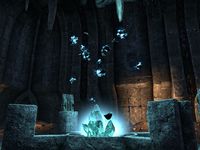 Replica of the Dark Orb, showing all the color variants

The Dark Orb is a magical relic found in the Depths of Malatar. It serves as the third boss of the dungeon after King Narilmor traps you in the room with it while the dark orb summons invulnerable Aurorans and additional orbs. The Aurorans will only die after it is shattered, and opens up the doors to the Tabernacle of Light that it was guarding.

Though the Dark Orb is a stationary boss and has no attacks of its own, it will summon many enemy mobs that prove to be deadly. It works in tune with the Aurorans it summons, having them regenerate health constantly. When the orb has no shielding on, it can be damaged for a period of time before entering an invulnerable state. When in this state, the Aurorans will stop regenerating health and can be killed. It is suggested that the tank gathers all the Aurorans in one corner of the room throughout the entire fight, and the DPS group members kill the Aurorans when the orb becomes invulnerable. Once a wave of Aurorans has been killed, another wave will spawn with an additional Auroran, with the last wave having four Aurorans.

The Purified legionaries that should be killed quickly as they can deal a lot of damage to all group members and have no defense buffs. The Dark Orb can also summon additional monocolored orbs to empower their corresponding Auroran (i.e. Blazing Orb gives the Blazing Auroran more health and higher damage), which can optionally be destroyed to make the Aurorans weaker.

Throughout the fight, King Narilmor will deliver his commentary of the orbs and aurorans that spawn from them:

"Meridia's light never fades."
"You could never compare to the purity of her creations."
"You should have begged for mercy."
"My realm is unsullied once more."