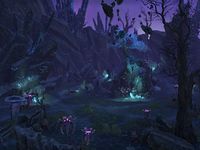 Dyzera's Realm[1] is a small pocket realm of Oblivion ruled over by a powerful Nocturnal Shrike named Dyzera, a servant of the Daedric Prince Nocturnal. It is a realm of perpetual twilight resembling the Evergloam, covered by exotic bioluminescent plant life.[2]

In 2E 582, Nocturnal formed the Triad by allying herself with Clavicus Vile and Mephala in a plot to wage war on their fellow Princes and ultimately gain unlimited power.[3] As part of this shadowy Daedric war, Dyzera was tasked with abducting Azura's mortal worshippers from Tamriel and sequestering them in hidden pocket dimensions of Oblivion, accessible only from Tamriel. By doing this, the Triad sought to bind Azura's ability to act on Tamriel, as Dyzera's abductions would place Azura's oracles out of her reach under the terms of the Coldharbour Compact.[4] However, one oracle managed to enlist the aid of the Vestige before being abducted, who then freed the oracles.[2]

Together, they managed to track down and enter Dyzera's base of operations on Tamriel, a ruined shrine to Clavicus Vile hidden within Cold-Blood Cavern in Shadowfen, recently vacated of its bandits occupants[5] and flooded with Skaafin. After her attention was drawn to this incursion, Dyzera opened a portal to this pocket realm within the cavern, inviting the interlopers to face her in combat. Even against the allied forces of the Triad, the Vestige managed to defeat Dyzera in her own realm along with her Herne and Hoarvor Daedra allies, before escaping back to Tamriel.[2] This ended Dyzera's plot against the oracles, but the Daedric war continued.[6]