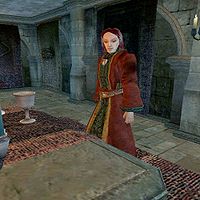 Lalatia Varian is an Imperial priestess serving as Oracle in the Imperial Cult at the Chapels in Ebonheart. She is one of the highest ranking members of the Cult in Vvardenfell, second only to Ruccia Conician. Lalatia is the highest ranking member you will ever need to speak with, however, as Ruccia is preoccupied representing the Imperial Cult on the Grand Council of Vvardenfell. She is the one who sends you on all of the later quests for the Cult. As well, she sells potions, spells, and spellmaking services to members of the Cult of rank Acolyte or higher.

Lalatia wears an expensive robe and shoes. She carries up to 40 gold. Aside from her natural charm and ability to absorb fatigue from others, she knows a selection of spells from the schools of Illusion, Mysticism, and Restoration. Specifically, these are the same spells that she has for sale.

Lalatia has the following spells for sale: