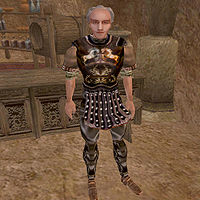 Wulf is an Imperial warrior located in the Tower of Dusk, Ghostgate. He is actually an Avatar of Tiber Septim, as is revealed by Lalatia Varian.

He wears an Imperial steel cuirass with a common shirt, pants, shoes and belt. He wields an iron broadsword and possess five pieces of Moon Sugar on him. Aside from his natural charm and ability to absorb fatigue from others, he knows no spells.

You can only encounter him while the Main Quest is active, after receiving Wraithguard, and before destroying Dagoth Ur. If you don't visit Ghostgate before destroying Dagoth Ur, he will be absent from the game from there on. If you do visit and talk to him while he is present at Ghostgate, he will offer you a special coin. Accepting this coin gives you a new power, Luck of the Emperor (Fortify Luck 20 pts for 120 secs), however you do not need to carry the coin to use the power.