The UESPWiki – Your source for The Elder Scrolls since 1995
< Morrowind: Quests: Imperial Cult / West Gash
Jump to: navigation, search

This article is about the quest. For the artifact, see Boots of the Apostle (artifact).

The place-name reference in the Oracle's prophecy is obvious. An ancient Dunmer stronghold called Berandas lies south of the village of Gnisis in the West Gash region. I would also not be surprised to find that the reference to "wings of twilight" designates the guardians of the treasure you seek. Winged twilights are Daedric servants of the Daedra Lord Azura, one of the Anticipations worshiped in the Tribunal Temple. -- A Savant's Tale

Lalatia Varian at the Imperial Chapels in Ebonheart will ask you to recover the Boots of the Apostle. Varian is considerably less cryptic in her prophecy this time, and actually names the ruins of Berandas, the stronghold on the west coast, southeast of Gnisis. It's on your paper map. 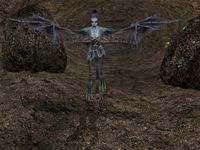 Go to Berandas with a good supply of Scrolls of Divine Intervention (you can buy as many as you want from the enchanter in Vivec's Mages Guild). Like most strongholds, Berandas is large and hard to miss from the outside, and has several levels inside. On the first level there is a corpse with two Daedric arrows sticking out of it. You shouldn't encounter anything too tough until you get to Berandas Underground, which has the body of the fallen hero with the boots. The corpse is in the room with two Winged Twilights.

Use the boots' levitate ability to find a few hidden places in the stronghold, including another god manifestation, this time of Mara (under the name of Ama Nin). She's in the same room with the boots. She wants a scroll of Divine Intervention, and rewards you with Mara's Blouse and Mara's Skirt plus a point of Reputation.

Return to Lalatia Varian with the boots, which you get to keep. You also receive ten points of Imperial Cult faction reputation, an extra point of Reputation and a ten point disposition bump with Lalatia.