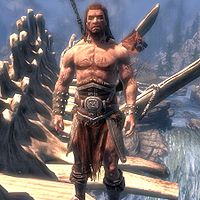 Tsun guarding the bridge to the Hall of Valor

Tsun is the Nordic god of trials against adversity. He died defending Shor from foreign gods,[1] with his death remembered as bringing about the current world.[2] Tsun and his brother Stuhn were both Shield-thanes of Shor.[1][3] He currently guards the Whalebone Bridge to the Hall of Valor of Sovngarde.[4]:631 At Shor's bidding, he has taken on the role of the master of trials, asking new arrivals to the utopia to prove their strength in combat against him before they can enter the Hall, where he fights using his axe.[3][5][6] The Bear was also one of the ancient Atmoran animal tokens, associated later with the Nord god Tsun.[2][7]

Tsun held great respect for magic, which he called the "Clever Craft", and wielded the power of the Voice. He and others desired to face Alduin when the Time-Eater set his soul-snare in Sovngarde, but for reasons unknown, Shor held them back,[3] though Alduin's grip on Sovngarde eventually was broken by the Last Dragonborn.[6] Only Tsun can transport the living from Sovngarde by summoning Shor’s Might to return them to the Throat of the World.[4]