The Hunting Grounds, also known as The Great Hunt, is a realm of Oblivion created and ruled over by Hircine, the Daedric Prince of the Hunt.[1][2][3] It has been described as a realm of dense woodland and vast grasslands populated by werebears, wild cattle and unicorns. It is a savage land inhabited by vicious creatures such as bears, wolves, werecreatures, and Daedra. These creatures are generally much larger than their counterparts in the mortal realm.[4] The Hunting Grounds are also populated with the spirits of small animals that may be hunted. All whom die within the Hunting Grounds are doomed to remain within the realm after death.[5]

Followers of Hircine are promised an afterlife within the Hunting Grounds, where they can indulge in spectacular hunts, as well as experience an endless cycle of violence as well as death and rebirth. Its inhabitants reside in the many hunting lodges dotting the landscape. The forests of the Hunting Grounds are teeming with powerful beasts, which allow Hircine's followers to engage in the most spectacular hunts. For the devoted, it is a paradise.[6] The souls of lycanthropes are claimed by Hircine and spend eternity experiencing the thrill of the hunt in his Hunting Grounds.[1] However, it is possible for a soul to transfer to the proper afterlife (such as Sovngarde) if their lycanthropy is cured posthumously.[7] During the daylight hours, werebears and fierce Nords stalk the land in their continual Hunt. When the sun sinks below the horizon, Hircine announces himself with a pack of werewolves to take his turn in the cycle.[4] 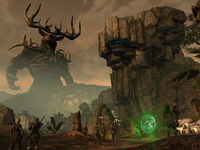 Hircine appearing before participants of the Great Hunt

The March of Sacrifices is a part of the Hunting Grounds made to resemble a Tamrielic marshland. It consists of three sections—the Bloodscent Pass, the Wispwood, and the Nightlands, and each representing different time of day. As a hunter passes through through the marsh, they will see a sudden transition from dusk to nighttime, and the flora will change in luminosity from a bright orange to blue to reflect. It is inhabited by Lurchers, Wispmothers, Indriks, and both hostile and docile spectral fauna.[11]

This Lore-related article is a stub. You can help by expanding it.
Retrieved from "https://en.uesp.net/w/index.php?title=Lore:Hunting_Grounds&oldid=2282589"
Categories:
Hidden categories: