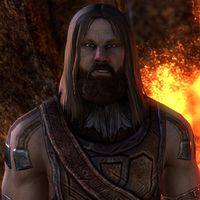 Songamdir is a werewolf packmaster who can be met in Bangkorai

. He considers himself as much wolf as man, and has been granted the power to control his transformations, so that he can enter a true wolf form, as well as that of a werewolf. He guides newly infected lycanthropes toward Hircine, in order to unlock their true power. 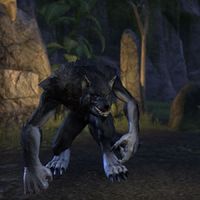 After being noticed by Thoreki while with a city, she will send you to seek out Songamdir. Once you have tracked him down he will first appear as an ordinary wolf. You can then talk with him.

"With each new wolf, our pack becomes stronger. You're one of us now."
Are you the packmaster?
"The same. Long before you were wailing in your momma's arms, Hircine gave me the keeping of his pack and all the power that goes with it.
I show pups like you how to make the most of his gift. I'm like a flea-bitten, shirtless priest of Hircine!"
You sound a little crazy.
"You want to be a werewolf? Maybe you're a little crazy yourself.
This portal will take you to Hircine's own hunting ground. If you're ready to hunt and kill and feed with your pack, then step through. I'll see you on the other side."
I thought you were just another wolf when I first arrived.
"Hircine gave me power beyond other werewolves when he chose me for his Packmaster. I can control my form, and I am as much a wolf as I am a man."

Once inside the Hunting Grounds, he will speak of what you need to do as he walks towards the shrine:

After Hircine commands you to hunt down a kill, you can ask Songamdir for a refresher. He can greet you in two ways:

"Do you feel the power? Can you taste it?"

"Don't drag your feet. The slow hunter never catches his prey, and I can't keep this gateway open forever."
What do I need to do again?
"Hircine demands tribute. Hircine demands meat.
Bring down the largest beast you can kill, then howl to your brothers and sisters. We will feed on the prey together. If Hircine accepts your tribute, you are one of us."

If you speak with him after being fully initiated, he will welcome you to the pack.

"With each new wolf, our pack becomes stronger. You're one of us now."