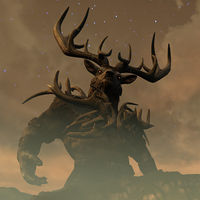 Hircine in his realm during the March of Sacrifices

Hircine is a Daedric Prince whose sphere is the Hunt, and is the creator of lycanthropes. The Hunting Grounds are his realm of Oblivion, and the Huntsmen are his Daedric soldiers.

He can be encountered a few times around Tamriel, in particular, he is the master of Ulthorn the Hound and his Houndsmen, granting them lycanthropy so they may overtake Malabal Tor. Hircine will also open the March of Sacrifices to all hunters, as he is hosting a Great Hunt for competitors whose quarry is the indrik Tarcyr.

Once The Pale Senche has been slain, an Aspect of Hircine in the form of a deer will appear and address you:

Aspect of Hircine: "A most unexpected end. But such a magnificent hunt! My Hounds will sing of it for ages.
Now, return to Haras. Tell him he may rest." 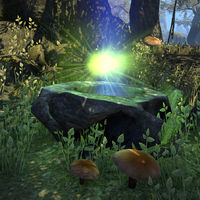 The Aspect of Hircine

In the woods east of the Tomb of the Apostates and west of Tanglehaven, an Aspect of Hircine will appear to speak to you and Firwin:[verification needed — Does the dialogue vary if your character is a werewolf?]

"Another comes for my blessing? Drink deep, and let the beast behind your eyes take hold.
Ah, but is that fear I smell? The young Bosmer fears what the future holds. Her flesh is weak, but not for long."
What have you done to Firwin?
"How ungrateful the little Elf is! She took the gift willingly, and now she wishes to turn away.
Her flesh and blood are mine, but I am not without mercy. Perhaps she can save someone... her mother... from the same fate."
What fate? What do you mean?
"The Elf child must take the heartblood from her sire. If her mother drinks of it, she may yet be saved.
But there is no redemption for the child. She is mine."

When a wrong item is chosen at the altars near the barriers, Hircine will mock Ulthorn with one of three lines.

At the first barrier, if you pick the hunting bow:

Hircine: "Ulthorn, I thought you knew better. Seems you are unworthy after all!"
Hircine: "Remember! The carving you whittled away every night, in vain!"
Hircine: "Ha! Not even trying. You've forgotten the amulet, fool!"

At the second barrier, if you pick the knife or the serving bowl:

At the third barrier, if you pick the bottle of poison or the hunting bow:

Hircine: "No, Ulthorn. Not that one."
Hircine: "Ha! And then, Ulthorn? What comes next?"
Hircine: "In the end, you came to me. And the Shade of Ulthorn's been with me ever since."

After entering the Hunting Grounds with Songamdir, he will ask you to kneel before Hircine's shrine and to listen to the words of the Daedric Prince:

Hircine: "You desire power, but have you the will? The God of Schemes has tasted your soul. You've come back tainted. Wrong. Hunt. Seek a tribute worthy of your pack. Bring it down, then howl for your brothers and sisters. If the pack accepts you, they will feed, and you will join them. Now, experience my power!"

After hunting for your pack, Hircine will call out to you:

Hircine: "Enough! The pup has become a wolf. Bow to me, hunter, and receive true power."

Kneel and pray before his shrine and Hircine will ask you once more if you accept his gift:

"Do you accept my power?"
<Bow to Hircine>
"Once a pup, now a wolf. Once prey, now a hunter. The blood of the true hunter, and the pack, is now yours. They are your only family, your only allegiance.
Hunt well."

You will then be a fully fledged werewolf.

The Heart of the Beast[edit] 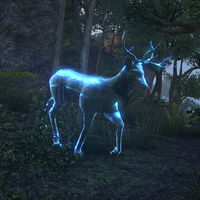 Aspect of Hircine as a deer

Once Wyress Nyronie's heart is cut out for the ritual to summon Hircine, he will speak through his shrine at the Fallen Grotto:

You must then speak to the Statue of Hircine. His dialogue will differ if you are a werewolf or have previously been a werewolf.

You will then see the Fallen Grotto become a green-blue tint, arriving in a mirror version of it within Hircine's Hunting Grounds. He will later speak to you through his Spirit of the Hunt and send you on your final trial, to kill Brinarch and retrieve his briar heart. Once you have successfully done this, he will speak to you a final time:

While hunting down Balorgh, you will overhear him have a conversation with Hircine.

Balorgh: "What do you mean? I've brought you the heart!"
Hircine: "Yes, but you were not the one to hunt my Hare. Why should I grant you this favor?"
Balorgh: "You want a hunt? Fine! I'll hunt down the ones who killed that beast in the first place!"
Hircine: "Intriguing. Very well. Bring me their hearts, and the boon is yours." 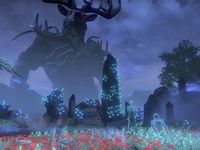 After Balorgh has been killed, the following conversation will occur between Hircine and Hanu.

Hircine: "Quite the thrilling hunt. My boon is yours, child of Azura. What do you seek?"
Hanu: "Freedom for myself and my father. Release us, so we may join our ancestors in death."
Hircine: "I hear two requests child, not one. You must choose. A heart for a heart is only fair."
Tharas: "Use Hircine's boon for your own freedom, Hanu. You don't deserve this fate."
Hanu: "Father, I....I don't know if I can do that."

In the Wolfhunter Trailer, Hircine says the following:

"They will pursue you."
"The hunt is all they know."
"They have your scent, and nothing will stand in their way."
"They fight with fang and claw, bow and shield, sword and spell."
"And you think you will triumph against them?"
"Very well, let the hunt begin!"