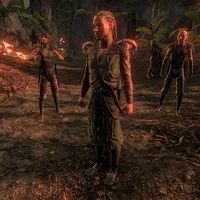 Foral is a Bosmer member of a Valenwood tribe, who can be found in the March of Sacrifices with Gaedil, Hunder, and his daughter, Lorhiel. Due to a string of unsuccessful hunts, his group has joined the Great Hunt as a way to regain Hircine's favor and save their tribe from starvation. In the Bloodscent Pass, he can be found injured near the Wyrd sisters, suggesting that his tribe was defeated.

After this, you can speak to him:

"Well, you certainly look like formidable competition. But rest assured, that indrik heart is as good as ours. Along with Lord Hircine's boon, of course."

Why do you need Hircine's boon?
"What mer wouldn't want Hircine's favor?
As avid followers of the Green Pact, my tribe depends on hunting for our survival. With just one boon from the Huntsman Prince, our prosperity shall be assured."

What will you ask Hircine to grant you?
"A weapon that will ensure successful and bountiful hunts for generations to come. An easy enough wish for one as great as Lord Hircine to grant.
Don't take this competition lightly, hunter. For my tribe, it's do or die."

Do you think yourself capable of hunting this indrik?
"The Hunting Grounds may be full of danger, but my tribe hails from Valenwood. Dangerous forests and elusive quarry are part of our everyday life.
I just hope you aren't foolish enough to underestimate us."

Within the Bloodscent Pass, Hanu can come across a dying Foral who will tell you what happened.

Foral: "That damn Orc...he lead them right to us. Lorhiel...you have to save...."
Hanu: "Poor s'wit. Barely started and already dead. We need to keep our guard up, lest we share the same fate."