A minotaur patrolling the Gold Coast 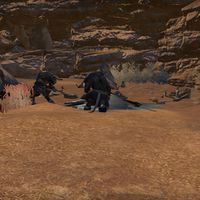 A minotaur poking a Gryphon's corpse with his axe

Minotaurs are a race of bull-like humanoids found on the Gold Coast and in Northern Elsweyr. They tend to congregate at ancient First Era ruins. Although usually considered to be nothing more than beasts, minotaurs possess rudimentary equipment and some shamans have the ability to use magic. Minotaurs have a chance to drop Oxblood Fungus Spores.

In Horns of the Reach, Minotaurs have allied with Reachmen to attack the people of Falkreath. In Northern Elsweyr, Minotaurs can often be seen clashing with gryphons.

As elite creatures, minotaurs are immune to all crowd control effects.