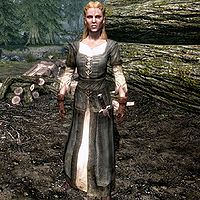 Gerdur at the Riverwood Mill

Gerdur is a Nord lumberjack in Riverwood. She runs the mill with her husband, Hod, and they have a son, Frodnar. Her family founded Riverwood, and has lived there for many generations. She is the sister of Ralof, and, like him, a staunch Stormcloak supporter. She holds some low level items in her inventory, which you can take if you went with Ralof and you ask her for assistance.

She wears farm clothes, boots and gloves. She carries the key to her house as well as common items and gold. She wields an iron dagger.

She can be found offering you work at the mill, saying things like "New to Riverwood? If you're looking for work, go see Hod at the mill." and "I own the lumber mill, and pay a fair wage. See my husband Hod if you're looking for work." She may also say, "We're a small village, but we work hard, and take care of our own.", "Only worry we've got is the war reaching this far.", "Years past, the lumber was used for houses or furniture. Now, the soldiers just buy it all.", "The thought of my wood being used for weapons... Makes me sick.", or "No use thinkin' of things I can't change. Too much work to be done..." If the quest The Golden Claw has not been completed, Gerdur may also inform you, "Lucan over in the Riverwood Trader says thieves broke into his store. Strange, he says they hardly took anything."

Asking her what she can tell you about Riverwood will have her reply, "It's my mill. Some folks think it's my town too, but it ain't. The Jarl in Whiterun owns the land and the town. I just pay the taxes."

You can also ask her where you can buy fresh supplies. She'll answer sarcastically, "And by 'supplies' I suppose you mean weapons and armor. Alvor can help you out. He's our blacksmith."

Gerdur can be seen having a conversation with her husband Hod at her mill:

Gerdur: "Can the sawmill handle those logs? They look a might big."
Hod: "Ay, it can. Wouldn't want them any bigger though."
Gerdur: "And the blade?"
Hod: "Gettin' dull. We'll need a new one soon."
Gerdur: "I'll talk to Alvor about getting us a new one."

She may also pay a visit to the town's blacksmith Alvor, asking him for parts:

Gerdur: "Are those parts ready yet?"
Alvor: "I can only hammer so fast, Gerdur."
Gerdur: "They don't have to be perfect. Just send them over when they're ready." 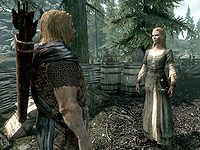 If you have escaped Helgen with Ralof, he will direct you towards Gerdur. You can either run ahead to talk to Gerdur before Ralof can reach her, or you can go along with him. If you go to Gerdur first, you can tell her that Ralof said she could help you out. She'll be suspicious at first: "Ralof? How do you know him?" You can answer that he's a friend and he promised she could help, and she'll say, "If you really are Ralof's friend, I'll be glad to help you. But you didn't answer my question - how do you know him?" Alternatively, you can skip this altogether and tell her that you and Ralof escaped from Helgen together. She'll reply, "You did? We heard that Ulfric was captured... ... no, sorry, but in times like these I can't just take the word of a stranger who wanders into town claiming to be my brother's friend." You can reply by saying, "A dragon attacked Helgen and destroyed it. Ralof and I escaped together.", though Gerdur will be incredulous: "A dragon? In Helgen? It can't be... although... It would explain what I saw earlier... flying down the valley from the south... I thought I must have just been seeing things..." If you instead tell her never mind, she'll be apologetic: "I'm sorry to turn you away. I hope you understand. But look... if you need work, Hod can always use help at the mill." 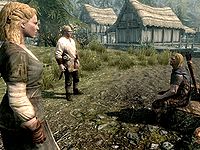 If you chose to tell her about the dragon, you can further mention to her that "That dragon flew off this way. You must have seen it.", she still won't believe you, however, as she will reply, "You're right, I saw it. But... how's that possible? Dragons don't exist... they're just stories from long ago..." You can say that Ralof will tell her the same thing, and she'll say, "I don't know why... but I actually believe you. You've got the look of someone who's just seen a dragon. Things just go from bad to worse. First the war, now dragons... what's this world coming to?" She'll continue by requesting your help: "The Jarl needs to know if there's a dragon on the loose. Riverwood is defenseless... We need to get word to Jarl Balgruuf in Whiterun to send whatever troops he can. If you'll do that for me, I'll be in your debt."

If asked, Gerdur will tell you how to get to Whiterun from Riverwood: "Cross the river and then head north. You'll see Whiterun on its hill as you pass the falls." You can also ask her if she has any supplies you could take. She'll reply, "Like I said, I'm glad to help in any way I can. Help yourself to whatever you need, within reason." You can then pick from a selection of items.

You can ask her what she can tell you about the Jarl, and she'll say, "Jarl Balgruuf? I don't mean to be disrespectful, as he's ruled Whiterun Hold well for years, but he seems in over his head now." She'll continue by speculating, "He's been trying to stay out of the war, but it can't last. He's going to have to pick a side. I'm afraid he's going to make the wrong choice." If you further ask her if Balgruuf is loyal to the Empire, she'll tell you, "I wouldn't say that. But he and Ulfric have been at odds for years, and I'm afraid Balgruuf will end up siding with the Empire because of it. But it's hard to believe that even Balgruuf would choose Elisif over Ulfric." Asking her if she supports the Stormcloaks will have her confirm it with "Of course. Ulfric's cause is just. It's time for Skyrim to rid itself of the Empire." She'll continue with her thoughts about the war: "The Empire may have been good for Skyrim once upon a time, but those days are long past. Banning the worship of Talos was the last straw. Thalmor everywhere, dragging people off for honoring our own gods! I'm glad Ralof is helping drive them out of here. If I was a bit younger, I might have joined the fight myself."

You can either ask her who Elisif is, and Gerdur will say, "I suppose she's Jarl Elisif now. She married High King Torygg just before Ulfric killed him. The Empire supports her claim to be High Queen. I don't really have anything against her - not her fault that her husband Torygg was bought and paid for by the Empire. But she's nothing but a puppet for the Empire now, with her husband Torygg dead. Ulfric will make sure she never takes the throne as High Queen." When you ask her if Ulfric killed the High King, she'll reply, "Some say murdered, but it was a lawful challenge in the old way. Ulfric called him out as a traitor to Skyrim, and killed him in single combat. If Torygg couldn't defend his throne, he had no business being High King." Mentioning to her that there's no High King now will have her say, "No, not until the Moot meets to choose another. And it won't meet until one side or the other wins the war. Don't worry, though. Ulfric is our rightful High King. He'll drive out the Empire and Skyrim will have peace at last."

You can wait around and see Ralof reunite with his sister:

Ralof: "Gerdur!"
Gerdur: "Brother! Mara's mercy, it's good to see you!" OR "Brother! Mara's mercy, you're safe! Your friend told me about Helgen..."
Gerdur: "But is it safe for you to be here? We heard that Ulfric had been captured..." OR "But is it safe for you to be here? Won't the Imperials be looking for you?"
Gerdur: "Are you hurt? What's happened?"
Ralof: "Gerdur... Gerdur, I'm fine. At least now I am."
Gerdur: "And who's this? One of your comrades?"
Ralof: "Not a comrade yet, but a friend. I owe him/her my life, in fact. Is there somewhere we can talk? There's no telling when the news from Helgen will reach the Imperials..."
Gerdur: "You're right. Follow me."

Gerdur will lead you and Ralof to a spot near the mill where no one is around, while she will call call her husband: "Hod! Come here a minute. I need your help with something."

Frodnar will run up to Ralof, excited to see his uncle:

Frodnar: "Uncle Ralof! Can I see your axe? How many Imperials have you killed? Do you really know Ulfric Stormcloak?"
Gerdur: "Hush, Frodnar. This is no time for your games. Go and watch the south road. Come find us if you see any Imperial soldiers coming."
Frodnar: "Aw, mama, I want to stay and talk with Uncle Ralof!"
Ralof: "Look at you, almost a grown man! Won't be long before you'll be joining the fight yourself."
Frodnar: "That's right! Don't worry, Uncle Ralof, I won't let those soldiers sneak up on you."

Frodnar will run off to watch for Imperial soldiers, while Hod will arrive and Ralof will sit on a tree stump:

Hod: "Now, Ralof, what's going on? You two look pretty well done in."
Ralof: "I can't remember when I last slept... Where to start? Well, the news you heard about Ulfric was true. The Imperials ambushed us outside Darkwater Crossing. Like they knew exactly where we'd be. That was... two days ago, now. We stopped in Helgen this morning, and I thought it was all over. Had us lined up to the headsman's block and ready to start chopping."
Gerdur: "The cowards!"
Ralof: "They wouldn't dare give Ulfric a fair trial. Treason, for fighting for your own people! All of Skyrim would have seen the truth then. But then... out of nowhere... a dragon attacked..."
Gerdur: "You don't mean, a real, live..." OR "When your friend told me, I didn't believe it at first either."
Ralof: "I can hardly believe it myself, and I was there. As strange as it sounds, we'd be dead if not for that dragon. In the confusion, we managed to slip away. Are we really the first to make it to Riverwood?"
Gerdur: "Nobody else has come up the south road today, as far as I know."
Ralof: "Good. Maybe we can lay up for a while. I hate to put your family in danger, Gerdur, but..."
Gerdur: "Nonsense. You and your friend are welcome to stay here as long as you need to. Let me worry about the Imperials. Any friend of Ralof's is a friend of mine."
Ralof: "Thanks, sister. I knew we could count on you."
Gerdur: "I ought to get back to work before I'm missed, but... did anyone else escape? Did Ulfric..."
Ralof: "Don't worry. I'm sure he made it out. It'll take more than a dragon to stop Ulfric Stormcloak."
Hod: "I'll let them into the house and, you know, show them where everything is..."
Gerdur: "Hmph. Help them drink up our mead, you mean. Good luck, brother. I'll see you later."
Ralof: "Don't worry about me. I know how to lay low."

After she and Ralof bid each other farewell, she will return to work at the mill.