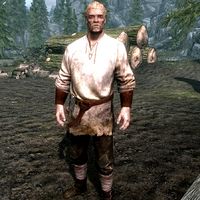 Hod at the sawmill

Hod is a Nord lumberjack in Riverwood, operating the wood mill there. He lives on the southeast edge of town and works his small farm and the mill with his wife, Gerdur. They have a son named Frodnar. He also seems to be a little flirty, saying: "You met Camilla yet? Wouldn't mind getting my hands on those trunks. He he he he." If you are a female, he will also remark: "Now you, lass... You've got some beautiful trunks yourself... Hmm?"

He will buy firewood for 5 gold per piece, and will also sell lumberHF if Hearthfire is installed. If his disposition is raised high enough, he will also allow you to cut your own lumber for free.

Hod wears a set of miner's clothes and a pair of boots. He carries a key to his house as well as common loot and gold. He wields an iron dagger and an iron war axe.

Hod can be seen having a conversation with his wife Gerdur at their mill:

Gerdur: "Can the sawmill handle those logs? They look a might [sic] big."
Hod: "Ay, it can. Wouldn't want them any bigger though."
Gerdur: "And the blade?"
Hod: "Gettin' dull. We'll need a new one soon."
Gerdur: "I'll talk to Alvor about getting us a new one."

Sometimes Hod and his son Frodnar can be seen spending some quality time together. When they have a conversation, Hod will usually ask his son about the recent pranks he did, and also encourages him. Hod will pick between three random lines and Frodnar will do the same:

In the evening, Hod will go to the Sleeping Giant Inn. Depending on who is present with him in the inn, he may have conversations with three different people.

Alvor may ask Hod for some raw materials for smithing:

Alvor: "I got a new order in for shields. I'm gonna need some hardwood planks. None of that soft pine this time."
Hod: "Ay, we can get that for ya. We just finished the timber for those catapults."
Alvor: "War may be good for business, but it's hard on families."
Hod: "A hard truth, that is. Let's drink to the fallen ones."

Hod advises Camilla about her love triangle with Faendal and Sven:

Hod: "You need to choose between those two boys. It ain't fair to Sven or Faendal to keep tuggin' on their heart strings like that."
Camilla: "It's bad enough my brother is harping on me to pick one. Don't you start too."
Hod: "I'm just sayin' you should pick one to settle down with."

Embry goes up to Hod and asks for a drink:

Embry: "How's about a drink, Hod."
Hod: "You'll be wantin' me to pay for them?"
Embry: "It's only right seein' as your [sic] the important lumber man."
Hod: "You come do an honest day's work at my mill, and I'll pay you an honest day's wages. Then we'll drink."