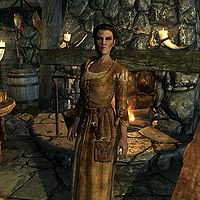 Camilla Valerius is an Imperial pawnbroker, and the sister of Lucan Valerius, the owner of Riverwood Trader in Riverwood. If Lucan dies, Camilla will take over the store. She is involved in a local love triangle as the love interest of both Faendal and Sven. She may be married if her disposition towards you is high enough, giving you full access to the Riverwood Trader.

She wakes up at 7am for a one-hour breakfast, then starts working at the store for ten hours. At 6pm, she heads to Sleeping Giant Inn for a drink and chats with other patrons. She stays there until 10pm, when she goes outside for a walk around Riverwood. She returns home at 12am to sleep.

She wears a belted tunic and a pair of boots. She carries a key to Riverwood Trader as well as common items and gold. She wields an iron dagger.

When you enter the Riverwood Trader for the first time, you can witness an argument between Lucan and Camilla regarding the stolen golden claw:

Camilla: "Well one of us has to do something!"
Lucan: "We are done talking about this."
Camilla: "Well what are you going to do then, huh? Let's hear it!"
Lucan: "I said no! No adventures, no theatrics, no thief-chasing! Oh, a customer. Sorry you had to hear that."

If Lucan is dead, you will have to get the quest from Camilla:

What were you arguing about with Lucan?
"You mean before he died? We had a break in. Thieves didn't touch anything on the shelves, or any coin, just one thing. A solid gold ornament, in the shape of a dragon's claw."
I could help you get the claw back.
"Oh really? Well, I'm not going to hold my breath. The thieves are up in Bleak Falls Barrow, northeast of town. I'd take you there, but with Lucan gone, I'm busy with the store."

If Lucan is alive you may offer to bring back the golden claw for him. Camilla will then question Lucan's plan of sending you to reacquire the claw:

Camilla: "So this is your plan, Lucan?"
Lucan: "Yes. So now you don't have to go, do you?"
Camilla: "Oh really? Well I think your new helper here needs a guide."
Lucan: "Wh- no... I.... Oh, by the Eight, fine. But only to the edge of town!"
Camilla: "Now, if you're going to get those thieves, you should head to Bleak Falls Barrow, northeast of town."

You can tell her if you want her to escort you or not:

"If you're going after the claw, you'll need to know the way."
I don't need a guide.
"Oh, really? You're just like my brother. Fine, but if you change your mind, I'll be right here."

Lead on then.
"I'll meet you outside!"

If you accept the offer, she will accompany you until the stone bridge to the north. She will make comments about the barrow, the thieves, and the claw as she directs you out of town:

"Those thieves must be mad, hiding out there. Those old crypts are filled with nothing but traps, trolls, and who knows what else! I wonder why they only stole Lucan's golden claw. I mean, we have plenty of things in the shop that are worth just as much coin. Lucan found the claw about a year after he opened the store. He never quite explained where he got it. He's a tricky one."

Somewhere in the middle of town, she will gesture towards the barrow and say:

"We have to go through town and across the bridge to get to Bleak Falls Barrow. You can see it from here, though. The mountain just over the buildings."

Once you reach the bridge, she will say:

"This is the bridge out of town. The path up the mountain to the northwest leads to Bleak Falls Barrow. I guess I should get back to my brother. He'll throw a fit if I take too long. Such a child...."

As she walks off she will say:

"Good luck. Lucan and I will be waiting for you back in the shop."

Once you return with the golden claw if you speak to her before speaking to Lucan:

If you decide to help Faendal and give her the fake letter:

I have a letter for you, from Sven. (Lie)
"Another poem, I'll bet. He does know how to make a girl blush. What's this? If that oaf thinks all I'm going to do is stay in that filthy house of his and clean, I'll.... You can tell Sven that he already has a mother. I'm not speaking to him anymore."

If you decide to help Sven and give her the fake letter:

I have a letter from Faendal. (Lie)
"From Faendal? That's strange. He's never written to me before. What, what is this? Is this what he really thinks about me? Well, you can tell that... that long-eared ass not to come around the store anymore. He's not welcome."

If you decide to tell the truth about Sven's fake letter:

Sven wanted to trick you into believing this letter was from Faendal.
"What are you talking about? What's in the letter? Oh my. He... he wanted me to think Faendal wrote this? Thank you for telling me the truth. Could you talk to Faendal, as well? I'm sure he'll want to thank you for standing up for him."

If you decide to tell the truth about Faendal's fake letter:

Faendal asked me to give you this letter, and say it was from Sven.
"He what? What are you talking about? Why that jealous idiot. Thought he could just manipulate me into never seeing Sven again? Thank you for telling me the truth. You should speak to Sven. I'm sure he'll want to thank you, too, for defending his name."

"You're a strapping young man. Don't be a stranger." (If you're male)
"The men here like my attention, and I like theirs. Best know your place." (If you're female)
"Thanks for bringing the claw back."
"It means so much to us to have the claw back where it belongs. Thank you!"
"You're not from around here. That makes two of us."
"I came here from the Imperial Province, to work with my brother Lucan."
"It got bad back in Cyrodiil. The war with the Thalmor ruined... everything."
"I came to Skyrim looking for a better life. So what did I get? Another war."
"I just want to find a good husband, and start a family of my own."
"Lucan's dead. I guess I'm in charge of the Riverwood Trader now."
"I guess Lucan will never see the golden claw again now."

After the completion of the quest The Golden Claw, the two siblings can be seen having a conversation about the goods they sell. They will pick between one of three available dialogue:

In the evening, Camilla may spend some time in the Sleeping Giant Inn. Depending on who is present with her in the inn, she may have conversations with two different people.

Hod advises Camilla about her love triangle with Faendal and Sven:

Hod: "You need to choose between those two boys. It ain't fair to Sven or Faendal to keep tuggin' on their heart strings like that."
Camilla: "It's bad enough my brother is harping on me to pick one. Don't you start too."
Hod: "I'm just sayin' you should pick one to settle down with."

Camilla compliments Sven on his performance: