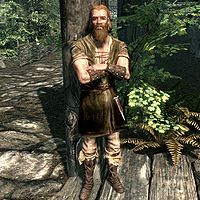 Embry is a Nord lumberjack and the local drunk of Riverwood.

He can always be found in and around the Sleeping Giant Inn where he is allowed to drink all night long. He starts his day at 7am, taking a one-hour breakfast in the taproom, then heads outside on the porch where he spends the next nine hours loitering around, either sitting on the bench or leaning against the railing. At 5pm he heads back inside and spends the entire evening (and night, due to a bug) drinking and dancing.

When approached, he will often respond with a drunken: "You're kinda fuzzy. What's wrong with ya?" Other times he will walk past you while remarking "Outta my way, stranger." In the evenings he will often shout "Gimme a mug of ale." after innkeepers Delphine or Orgnar but will otherwise focus on his drinking and the performances of local bard Sven.

When he spends time on the porch, he will often try to persuade one of the local guards to drink with him:

Also, if he meets Sigrid he will make a poor attempt at an invitation:

Embry: "Care to have a drink with me, sweet Sigrid?"
Sigrid: "Drunk again, Embry? Don't let Alvor hear you talking to me that way. He'll stick your head in his forge."
Embry: "So that's a no I take it?"

Sometimes, he may ask for some ale from Orgnar:

Embry: "I need some more ale, Orgnar."
Orgnar: "You've had more than enough. Besides, you still haven't paid for the last one."
Embry: "I'll find some coin for you. I always do."
Orgnar: "Until then, I've no ale for you."

Sometimes, he may ask for a drink from Orgnar using one of the following lines:

Orgnar will then reply using one of the two potential lines:

He may also approach Hod to ask him for a drink:

Embry: "How's about a drink, Hod."
Hod: "You'll be wantin' me to pay for them?"
Embry: "It's only right seein' as your [sic] the important lumber man."
Hod: "You come do an honest day's work at my mill, and I'll pay you an honest day's wages. Then we'll drink."