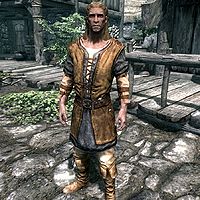 Sven outside his house in Riverwood

Sven is a Nord lumberjack living in the town of Riverwood. He is a graduate from the Bards College and makes a living playing music at the Sleeping Giant Inn. He is involved in a love triangle with Faendal and Camilla Valerius.

Sven shares a house with his mother Hilde in the western part of Riverwood. He sleeps there every night between 2am and 9am and always starts the day with a one-hour breakfast, relaxing behind locked doors. At 10am he heads down to the Sleeping Giant Inn where he puts his education from the Bards College to good use, singing, playing, and taking requests for a whopping sixteen hours, before he heads back to the house and goes to bed.

He wears a simple set of farm clothes with a pair of boots. He wields an iron dagger and carries his house key and a selection of common loot and gold.

During Before the Storm, your very first visit to Riverwood will see Sven patrolling up and down the street, right outside his house, with his elderly mother relaxing on the porch. As soon as Hadvar or Ralof has finished conversing with his relatives, Hilde will stand up and get hysterical and a tired Sven will try to calm her down:

Hilde: "A dragon! I saw a dragon!"
Sven: "What? What is it now, mother?"
Hilde: "It was as big as the mountain, and black as night. It flew right over the barrow."
Sven: "Dragons, now, is it? Please, mother. If you keep on like this everyone in town will think you're crazy. And I've got better things to do than listen to more of your fantasies."
Hilde: "You'll see! It was a dragon! It'll kill us all and then you'll believe me!"

When talked to, Sven will immediately tell you: "Faendal thinks he can woo Camilla Valerius away from me. She's already mine, I keep telling him." He will then move on to a set of regular greetings: "You look like a traveler. Someone that has seen far away places and heard new stories.", "You should come hear me play at the Sleeping Giant Inn. For a small sum you can even pick the song.", "I've been trained as a skald, as was my father, and my father's father before him." and "My time at the Bards College was brief. A prodigy has little need for formal education." The rest of his greetings see him return to his problem: "I'm composing a new song. A ballad, for Camilla Valerius." and "Some day Camilla will know of my affections. Some day..." If you tell him about the dragon in Helgen he will put his own problems aside for a minute: "Truly? So maybe my mother isn't crazy after all. You had best tell the Jarl in Whiterun. He needs to know about this." He will also recommend a few places in Riverwood: "Lucan's got a little bit of everything at the Riverwood Trader. If you need weapons or armor, see Alvor, the blacksmith." If you talk to him while he is at the inn, he will also readily tell you about his days at the Bards College: "At the Bards College in Solitude. They train bards and skalds like myself. If you go there, talk to Viarmo. He's the headmaster." 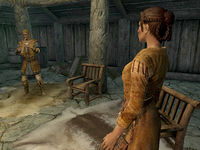 When Camilla comes to visit Sven at the inn between 6pm and 10pm, they will often engage in flirtatious conversation. If Sven meets his rival, however, the tone will be entirely different:

Faendal: "Stay away from Camilla."
Sven: "Ah, Camilla. Fair as the morning sun. But I ask you, how could she prefer your brooding to my romantic tunes?"
Faendal: "Just stay away from her, or...or else."

If you follow up on his hints about Faendal and Camilla, he will explain the situation at hand: "Camilla Valerius knows I'm the best man in Riverwood. That elf is kidding himself if he thinks she would choose him over me. I've seen him sneaking over to the Riverwood Trader to speak with her when I'm not around. He's wasting his time." You can then reply in two different ways:

He sounds persistent. Why not do something about it?
"You may be right. Camilla may see Faendal as little more than a friend, but why take chances? Here. Give Camilla this letter. It's full of venomous nonsense. Tell her it's from Faendal."

Yes. Two people spending time together never blossoms into courtship.
"Is that sarcasm? I've heard better wisecracks from Orgnar. Still, you have a point. Camilla letting Faendal visit her isn't a good thing for me. Here, let me give you a particularly venomous letter. Say it's from Faendal. That should get Camilla to stop inviting the elf over."

Regardless of your choice, he will hand you a fake letter and Sven will remind you: "That letter ought to convince Camilla to never speak to Faendal ever again." You can also show it to Faendal, who will write another fake letter to make Sven look sexist. If you show that letter to Sven, he will be quite surprised: "What is this? The elf playing at treachery? Shocking. As if I would write this dribble. How about we play a bit of turnabout with Faendal? Here. I had to use simple words, but this letter should convince Camilla it's from him." If you end the quest in Sven's favor, he will say: "Now that's what I like to hear. Good work. I think you deserve some gold from my tips at the inn." He will then hand you a leveled amount of gold. Additionally he will now be available as a follower.

Working for the bossy Delphine at the inn sometimes means that Sven will be admonished:

Delphine: "Sven, we need to talk..."
Sven: "Here we go..."
Delphine: "It's about your singing. Well, not your singing, your songs. But you know what I'm talking about."
Sven: "You do realize these simpletons wouldn't know real music if it bit them in the britches, hmm? Very well. Your wish is my command."
Delphine: "Wonderful. And let's not have this chat again next week. Agreed?"