The UESPWiki – Your source for The Elder Scrolls since 1995
< Skyrim: Civil War Champions: Quests
Jump to: navigation, search 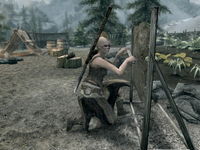 You may have to take out the competition...

Note: This stage of the quest is only available if you install the Civil War Champions Creation on a character that has not yet sided with the Imperial Legion or the Stormcloaks.

Go to The Drunken Huntsman in Whiterun. On the counter inside, you will find a note called Battle of Champions, which describes an upcoming battle between the Legion and the Stormcloaks in the ongoing Civil War. Both sides intend to nominate a Champion, but nobody has been chosen as of yet.

If you wish to side with the Legion, you must journey to Castle Dour in Solitude to speak with Legate Adventus Caesennius. Although the note states that the Legion will accept "any willing soldier", you will need to pass a Persuasion check (Speech 50) to convince him to let you act as the Legion Champion. If your Speech skill is not particularly high, it would be wise to bring a Fortify Persuasion potion with you. Once you persuade him, you will be handed the Imperial Armory Key to unlock a chest in the nearby equipment room.

If you instead wish to fight for the Stormcloaks, you must bring five snow bear pelts to Yrsarald Thrice-Pierced in the Palace of the Kings in Windhelm. These can be taken from snow bears or purchased from hunters and general goods merchants starting at level 10, although at low levels you may have difficulty with this task. Luckily there is an alternative and more underhanded approach: the note mentions a prospective Champion named Klija Wolf-Claw who wishes to fight for the Stormcloaks. She has already gathered the pelts and can be found at the small settlement of Kynesgrove just south of Windhelm. She can be found at all hours at the Steamscorch Mine Camp and carries an item named Klija's Snow Bear Pelts on her person. It can be a challenge to pickpocket the item from her, but be warned that killing her counts as murder and will land you with a significant bounty if you are caught. Whichever way you go about obtaining enough pelts, speak with Yrsarald to receive the Storm-Bear Chest Key unlocking a chest in the Palace's war room.

Note: This stage of the quest is only available if you install the Creation on a character which has already joined the Legion or the Stormcloaks.

If you're already a member of the Legion or the Stormcloaks, you will receive a letter by courier[verification needed — when?] from your commanding officer, advising you that a challenge has been issued by the Stormcloaks and requesting your assistance in dealing with it. If you are a member of the Legion, you will receive a Letter from the Empire requesting that you speak with Legate Adventus Caesennius in Castle Dour to receive your custom forged equipment for this task. If you are a Stormcloak, you will instead receive a Letter from the Stormcloaks asking you to meet with Yrsarald Thrice-Pierced in the Palace of the Kings. Meet with your commanding officer to receive a key to a nearby chest. 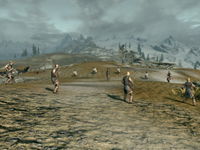 Whichever path you take, once you are named Champion you will need to unlock the relevant chest and loot every item within. The quest will not progress unless you take everything, so be sure to pick up both weapons even if you only mean to use one. The chest also contains the Map of Battle Location, which can be examined in your inventory if you wish. The quest marker will direct you to the battle location in any case, a clearing on the plains of Whiterun Hold directly west of Shimmermist Cave. When you arrive, you will find five soldiers from both sides facing off against each other, with the other Champion patiently waiting for you in the center. If you side with the Legion, the Champion will be Klija Wolf-Claw if you didn't steal her pelts, but if you stole her pelts you will face a generic Stormcloak Champion instead. If you side with the Stormcloaks you will face a generic Imperial Champion.

Speak with the other Champion to begin the battle. You will need to slaughter all enemy combatants and loot the fallen Champion for their gear in order to complete the quest. You may have issues with encumbrance at this stage if you intend to bring all this equipment away with you. Both sets of items are extremely powerful and make for a worthy reward. After the completion of the quest, you will receive a Letter of Commendation (either the Legion version or Stormcloak version) via courier from your commanding officer to congratulate you on your victory.