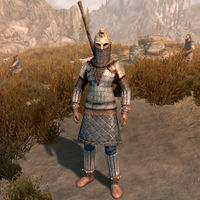 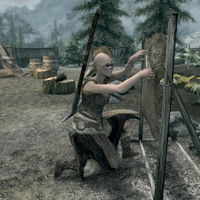 Klija Wolf-Claw is a Nord warrior from Bruma who wishes to fight for the Stormcloaks as their champion.

If you begin a new character with the Civil War Champions Creation installed (or if your character has not yet joined the Stormcloaks or the Legion when the Creation is loaded), Klija can be found at the Steamscorch Mine camp at Kynesgrove. You will be directed to her as part of the related quest if you choose to side with the Stormcloaks, as an alternative to gathering five snow bear pelts. She carries a unique item called Klija's Snow Bear Pelts which can be stolen from her and presented to Yrsarald Thrice-Pierced to become the Stormcloak champion. The pelts can also be taken from her corpse if you so choose, although you will get a bounty for murdering her in cold blood.

If you decide to side with the Imperial Legion, Klija will appear at the battle location on the plains of Whiterun Hold alongside several Stormcloak soldiers. She will act as the Stormcloak champion and you will need to kill her and loot everything from her corpse in order to complete the quest. You can speak to her briefly before the battle commences.

At Kynesgrove, Klija will be wearing hide armor and boots and carrying steel arrows, an iron battleaxe, a hunting bow, a steel dagger, a silver garnet ring, a lockpick, a bottle of Alto Wine, the snow bear pelts, and some gold. At the battle location, she will instead be wearing Storm-Bear armor, boots, gauntlets, and helmet. She wields Tsun's Judgement in combat and also carries the Storm-Bear sword and shield.

This Skyrim-related article is a stub. You can help by expanding it.
Retrieved from "https://en.uesp.net/w/index.php?title=Skyrim:Klija_Wolf-Claw&oldid=2095505"
Categories:
Hidden categories: