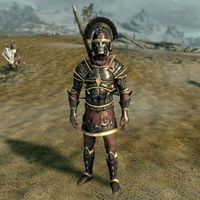 If you decide to side with the Stormcloaks during the related quest, the Champion will appear at the battle location on the plains of Whiterun Hold alongside several Imperial soldiers. You will need to kill him and loot everything from his corpse in order to complete the quest. You can speak to him briefly before the battle commences.

This Skyrim-related article is a stub. You can help by expanding it.
Retrieved from "https://en.uesp.net/w/index.php?title=Skyrim:Imperial_Champion&oldid=2180143"
Categories:
Hidden categories: