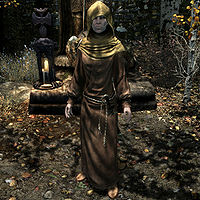 Nura Snow-Shod is a Nord priestess of Talos, and wife to Vulwulf Snow-Shod. She has two sons, Asgeir and Unmid Snow-Shod. She also had a daughter, Lilija, whom she trained to replace her as both healer and priestess. However, Lilija joined the Stormcloaks and was killed. Her daughter's death has increased Nura's strong feelings towards both Talos and Skyrim. She spends most nights and early mornings praying to the statue of Talos in Riften.

Nura wakes up at 8am for a two-hour breakfast with Vulwulf and Asgeir. After this, she goes to the statue of Talos and tends it until 6pm to take a break for a two-hour dinner at her house. She then returns to the statue for the rest of the day. She is supposed to sleep at 12am, but does not due to a bug. If the Imperial Legion takes over Riften, the ban on Talos worship will be enforced, causing her to stay home all day.

She wears hooded monk robes and boots. She carries the key to her house, a leveled dagger, a belted tunic, some potions, a fairly valuable staff (either a Staff of the Flame Atronach or a Staff of Reanimation), and a selection of middle-class items and gold. She also carries some potions: a potion of cure disease, a cure poison, and two leveled restore attribute potions. She knows the spells Frostbite and Lesser Ward.

Her greetings show her devotion to Talos, as she says things like "How can a humble servant of Talos help you today?", "Talos bless you, my child.", "Blessings of Talos upon you.", and "Blessings upon you, traveler." When you end conversation with her, she will say either "Talos preserve you.", "Talos guide you.", or "Farewell."

You can first ask Nura what she can tell you about Talos: "He's the protector of Man, the Dragon of the North, the patron of all Nords. And despite the Imperials and their treaty, he will always be one of the Nine Divines. A devout Nord would rather fall in battle and have his blood spill upon the earth than allow the Empire to strike his name from the divinity."

From this, asking her "Why all the hatred for the Empire?" will have her explain, "Talos is part of our culture. He's part of our heritage and our tradition. He's Skyrim personified. To suddenly have all that wrenched away is like losing someone you hold dearly in your heart. The Empire already took my daughter from us, but by Talos they will not take our homeland!"

Should you ask, she will also tell you what happened to her daughter: "I trained our daughter Lilija as a healer... to one day tend the Shrine of Talos and replace me as a Priestess of Talos. When the fighting began over the White-Gold Concordat, she ran off to join the Stormcloaks. She had her father's fire, how could I say no? She died out there, only having tended to the wounded soldiers for a few months. We never even found her body... the Empire burned all the dead."

Despite her being a priest, if you give her a religious pamphlet, she will be disgusted: "Ugh. Get this awful paper away from me, by Talos!"

Bound Until Death: Assassinate Vittoria Vici at her own wedding.

During this quest, Nura and Vulwulf will be found in Solitude attending Asgeir's wedding to Vittoria Vici, an Imperial. Nura may comment with "If my Asgeir is happy, then I'm happy. Really.", "To think, my little boy is married. And to an Imperial. Oh, they grow up so fast.", or "Vittoria may be pretty, but does she have the right hips for the job? I want grandchildren, and lots of them." Asking her if she's having a good time will have her say, "Oh. Why... why certainly. I keep telling myself I'm not losing a son, I'm gaining an Imperial. Daughter. An Imperial daughter..."

As Vittoria Vici lies dead, Nura can be found yelling, "By Ysmir, this is horrible! I never wanted the girl dead, I swear!"

At Snow-Shod Manor, Nura can be overheard talking with her family: