Dragon Rise was an Elsweyr-based event available to players who own the Elsweyr Chapter. The event ran from October 3 until October 14, 2019 and various rewards could be earned by adventuring in Northern Elsweyr and completing certain activities.

A similar event, the Pan-Elsweyr Celebration, was first held in 2021 and was extended to include both Northern and Southern Elsweyr.

During the event period, The Impresario sold the following items: 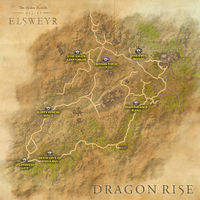 The primary activity is geared towards players earning the Northern Elsweyr Pathfinder achievement, which requires visiting all of Northern Elsweyr's striking locales. The achievement unlocked by a player (counted once per account, per server) contributes to a running total, which is updated each day of the event. When that total reaches one of three thresholds, a new reward was unlocked. Players who have already unlocked the achievement will be counted towards the grand total:

These targets were achieved by the fifth day of the event and the rewards were available from the Crown Store in the form of the "Dragon's Rise Reward Bundle" shortly after. The aforementioned boxes of loot for achieving 100% are detailed below.

"This Offering contains a bevy of loot, including another Offering. There are 10 Offerings in total, and you may open them at your leisure."

Ten boxes of various loot were rewarded to all players once the 100% target was achieved. The first box was named "Nafaalilargus's First Offering", which contained the first batch of loot plus Nafaalilargus's Second Offering. Similarly, the second box contained more loot and third box. This repeated ten times until the tenth and final box was granted. Below are a list of notable rewards that all players were could receive. Some (*) were guaranteed for all players:

In addition to the above primary rewards, a number of bonus rewards are available during the event:

Nafaalilargus's Strongbox has a chance to drop from various enemies in Northern Elsweyr during the Dragons Rise event in 2019. These include roaming Dragons and the bosses from Delves, Public Dungeons and World Bosses of Elsweyr. The strongboxes could possibly contain the below items.

Sets
The following Overland Sets will drop weapons or armor in fine, superior or epic:

Save Elsweyr and Support Pet Wellbeing!

The event also served as a charity drive, where Zenimax pledged to donate $1 USD to the #SlayDragonsSaveCats charity campaign for every five Dragons defeated, up to a maximum of $200,000. During the event, the Elsweyr Chapter was also on sale at up to 50% off. Slay Dragons Save Cats continued long after the Dragon Rise event ended, running until December 9, 2019. The subsequent Dawn of the Dragonguard event also tied into this.

Proceeds went to the Best Friends Animal Society and Four Paws organizations, who could also be donated to directly. Players were also encouraged on social media to share their in-game tales of adventure regarding save the Khajiit from the Dragon threat, or to show their real-world efforts to protect pets in local communities using the #SlayDragonsSaveCats hashtag.

During the event, players were able to spot dragons in the various faction starter cities and capital cities.