The following are known Events of 2016 in Elder Scrolls Online. 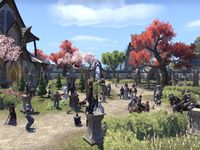 Heart's Day was celebrated in the form of a mass wedding ceremony held in front of the Temple of Auri-El in Vulkhel Guard, Auridon. During the event, Lead Loremaster Lawrence Schick performed a special reading which was broadcast on Twitch. The event was restricted to the Dominion instance on the Public Test Server. In addition, a Crown Store Heart's Day sale was also held between February 11 and February 17, with 50% off the Wedding Dress, Wedding Suit, and Pledge of Mara.

The inaugural Anniversary Jubilee celebrated the game's two year anniversary. The event introduced the quest Ache For Cake, which involved helping Chef Donolon bake his new Jubilee Cake recipe. The 2016 Jubilee Cake Memento was given as a reward, and would result in a 100% Experience bonus for you and your group when activated during the event.

DMM ran a free trial campaign (無料体験キャンペーン) of the Japanese version of the game in late 2016. This promotion was only available to players with DMM accounts. New players who purchased the game during this period would receive the Explorer's Pack pre-order bonus, despite the game officially launching in Japan almost two months prior. This event occurred only on the NA megaserver for PC/Mac, since it's the only server accessible with the Japanese edition.

Dark Anchors Aweigh! The struggle against the forces of Coldharbour has caused a "Planemeld Palpitation" that is skewing the odds and outcomes of events in and around the Imperial City! Time folds, reality shivers, and opportunities that have passed are available again. But this warp event won't last, so act now, and grab your chance while you can!

To celebrate the one year anniversary of the Imperial City DLC release, a "Planemeld Palpitation" event was held in the Imperial City. The drop rate of Tel Var Stones was doubled, as were the chances of obtaining the Soul-Shriven Skin and Stonefire Scamp collectibles from defeating the Simulacrum of Molag Bal. The DLC was 50% off in the Crown Store, and a new Imperial City Collector's Bundle was made available for the duration of the event. The event was originally to end on September 6 but was extended for a day.

The inaugural Witches Festival event was celebrated around Halloween 2016. During the event a free whistle was available from the Crown Store, which began the quest The Witchmother's Bargain when used. A Witchmother's Whistle Memento was rewarded for completing the quest, and could be used to obtain a 100% Experience bonus. With the buff applied, many different types of bosses would begin to drop Plunder Skulls containing unique recipes, Hollowjack motif chapters, and even two rare hats. Unlocking all of the achievements for this event would unlock the "Sun's Dusk Reaper" title.

To celebrate the one year anniversary of the Orsinium DLC release, a celebration was held in Wrothgar. During this event, the rewards from both Wrothgar daily quests and Maelstrom Arena were doubled. Regular nodes found in Wrothgar also provided double the items. The DLC was 75% off in the Crown Store, and the original Orsinium DLC Collector's Edition was made available again at a discounted price.

The 2016 ESO Free Play Weekend took place from November 16 to 21 on PC/Mac and PlayStation 4, and November 23 to 27 on Xbox One. During this time, players could log in and play ESO without purchasing a copy of the game. DLC content was still locked without purchasing.

The inaugural New Life Festival was celebrated in late 2016. Based on the festival of New Life, players could complete a variety of daily quests during this festival to earn the newly introduced Skinchanger motif chapters, New Life Festival recipes, participate in parties for each Alliance race, and obtain exclusive collectibles. A 100% Experience bonus could also be obtained during this event.