I have summoned one of the fabled witchmothers, who are rumored to appear only during the Witches Festival! Legends say these strange beings can be bargained with for power. 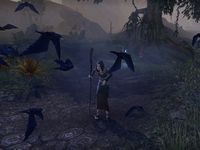 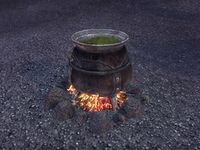 You will first need to acquire the free Crow Caller whistle from the Crown Store. The whistle can be found in your inventory in the Miscellaneous section (on PC) or the Supplies section (on console); activate it to begin this quest: "<Upon close examination, a faint yellow light emerges from within. Elaborate sigils seem to be carved along the insides of the crow caller.>"

<Use the crow caller.>

Using the whistle will cause Witchmother Olyve to appear in a cloud of crows. She will request that you obtain a pumpkin, a sample of guts, and an "Essence of Death". To obtain the Essence, you must kill the boss of any delve outside of Cyrodiil.

Once you have all three ingredients, you will be directed to Olyve's Brewery in

Stonefalls. Note that as of the 2017 event, you may use any of these three locations, regardless of your alliance, though the quest will still direct you to your alliance's zone. Deliver the items and Olyve will concoct her brew. Finish the quest to receive your reward, which includes the Witchmother's Whistle memento. Using this whistle will summon the Witchmother's Brew.

Although this concludes the quest, you will need to summon and drink from the Witchmother's Brew to begin the event. As well as transforming you into a skeleton and granting you a 100% boost to experience gained for two hours, the Brew will allow you to obtain Plunder Skulls from all manner of bosses, including Delves, Dolmens, Group Delves, Public Dungeons, Group Dungeons, Trials, Group Bosses, Dark Fissures, and Celestial Rifts, but excluding most quest bosses. Note that while you cannot drink the Witchmother's Brew in Cyrodiil, you can drink it just before travelling there and still receive the benefits (including Plunder Skulls from bosses) for the duration.

The effect can be reapplied using the memento for the duration of the Witches Festival. For respawning bosses, it should be noted that the skull drops follow a separate timer, so forcing the boss to spawn repeatedly will not result in any extra gain.