Nodes are found throughout the world and can be harvested for crafting. They come in several forms, including plants, ore veins, logs, and runestones.

All nodes scale to either the level of your crafting passives, or your character level. Before Update 12, some zones had static or partially-static node tiers instead, corresponding to the level of the content.

Certain zones offer a chance to obtain additional rare crafting materials when harvesting a node there. These are listed in the table below:

Plants yield reagents for Alchemy, raw materials such as jute for the clothing profession, and bait for fishing. In Shadowfen, these nodes also have a chance to drop the Tide-Glass Beads antiquity lead for the Harpooner's Wading Kilt.

Ore veins are distinguishable from regular rocks by virtue of their shape, size and color. The first type encountered in early levels is iron. Ores can be refined for blacksmithing.

Logs can be harvested for wood used in the woodworking skill. The first type encountered is maple.

Ore Seams can be harvested for metal dust used in the Jewelry Crafting Skill. They appear in the same locations where Ore Vein nodes are typically found. The first type encountered is pewter.

Runestones are for enchanting. Small shrine-like objects scattered around the world can be activated to yield a number of runes. Before Update 10, there were red, yellow and blue runestones which yielded a single rune of a specific type.

Psijic Portals contain a variety of valuable loot. They appear in the same locations where Runestone nodes are typically found, near old ruins and burial sites. Similar to Runestone nodes, they will always contain one Runestone of each type, Aspect, Essence, and Potency, but the Aspect rune will always be Jejota or better.

Psijic Portals are initially invisible, but can be revealed by unlocking the Psijic Order skill line by completing The Psijics' Calling.

Other gathering nodes include pure water and water skins, which may be harvested for solvents. In Shadowfen, these nodes also have a chance to drop the Tide-Glass Beads antiquity lead for the Harpooner's Wading Kilt.

Furrier's traps (found only at Clothing Survey sites) can be harvested for medium armor materials.

As the Clockwork City zone does not have any natural flora, Alchemy, Clothing and Woodworking materials are salvaged from various artificial nodes instead. 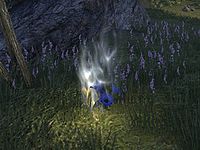 There are two types of abilities that help with gathering. Both are passive.

Keen Eye abilities make materials easier to spot out in the world. There is a Keen Eye ability for every profession except Provisioning.

Hireling abilities make a hireling go out and gather materials for you once a day (or twice with enough skill points invested). Alchemists have no such hireling.