The UESPWiki – Your source for The Elder Scrolls since 1995
< Online: Items: Collections / Events
Jump to: navigation, search

This article is about the collectible. For the creature, see Nascent Indrik (creature).

Nascent Indriks are special mounts that can be summoned by combining four magical feathers bought from The Impresario, as illustrated in Scroll, Indrik Life Cycle. Once summoned, the Nascent Indrik can be further evolved into one of numerous variants by feeding it certain berries.

As an incarnate nature spirit, an Indrik first appears in its comparatively drab Nascent form before somehow differentiating into one of their more splendid variations. 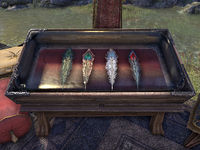 In order to acquire the base Nascent Indrik mount, players must take part in several in-game events and buy four magical feathers. Originally, the feathers were released incrementally at different events in 2018, but all four became available at every event thereafter. Feathers are bought with Event Tickets.

As detailed in Memorandum: Indrik Emergence & Formal Development, Indrik can evolve when fed enchanted berries. There are currently six possible evolutions of the base indrik. The first four evolutions correspond with the original feathers used to summon the base mount. Berries can be bought from the Impresario during various events from 2019 onward for 000001010

These magical creatures have a special relationship to Y'ffre the nature god, and seem to draw strength from the very bones of the earth beneath their hooves. It's a privilege for a mortal rider to be borne by such an enchanted beast.

The last time all four Dawnwood berries were available was during the Jester's Festival 2019 event.

The Luminous Indrik seems to radiate the same soft aetherial glow as the stars in the heavens, but steady and nearby rather than flickering and remote. It's reassuring, somehow.

The last time all four Luminous berries were available was during the 5th week of the Anniversary Jubilee 2019.

It's believed by some of the Sapiarchs of the High Elves that an Onyx Indrik comes about when a Nascent Indrik is exposed to certain berries imbued with geological Earthbones essences."

The last time all four Onyx berries were available was during the Dragon Rise event.

Some find it strange that the Pure-Snow Indrik should exist in Summerset, where winter never comes, but as the Sapiarch of Elemental Arcana points out, "Frost magic works everywhere."

Rare indriks don't die but instead live on as haunting apparitions. Though they walk between two worlds, these ghostly steeds serve their chosen companions well as mounts. Some Summerset High Elves claim this is a true sign of a rider's worthiness.

The Spectral Indrik was obtainable by combining four different Spectral Berries with a Nascent Indrik mount. The Indrik's default name is "Elegy".

When the winter air grows quiet and heavy just before snowfall, woodsmoke touched by Magicka swirls into the form of an Icebreath Indrik. Summerset scholars believe these mounts allow those with insight and wisdom to understand their deepest wish.

The Icebreath Indrik is obtainable by combining four different Icebreath Berries with a Nascent Indrik mount. The Indrik's default name is "Crystalfall".