The UESPWiki – Your source for The Elder Scrolls since 1995
< Elder Scrolls Online: Quests: Prologue Quests
Jump to: navigation, search

Blademaster Kasura has agreed to search a nearby Dragonguard tomb for a former student interested in finding some way to fight back against the Dragons in Elsweyr. I agreed to help her in this endeavor.

Wisdom From The Past[edit] 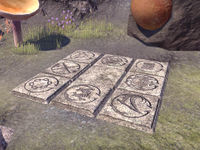 Speak with Kasura in the area designated by your alliance. If you've completed the main story quest, she'll be happy to see you again. A former student of hers seeks the ancient Dragonguard's knowledge on hunting Dragons. Kasura needs to search for a few tombs; she'd like you to scope out one of them while she takes the other. She gives you a Dragonguard Seal. It will activate three glyphs that will reveal the entrance of the tomb you seek. She needs you to find the tomb at the location she provides you and search for anything that might help her student in their effort against the Dragons ravaging Elsweyr: historical documents, tools, anything.

Kasura's notes are nearby, and provide a succinct explanation of your task. Exit the building and make for the ruins marked on your map.

Head for the ruins and take care to avoid the hostile spirits. Follow the map markers to reveal the hidden glyphs: To the East is the Glyph of Bravery, the North is the Glyph of Honor, and to the south, the Glyph of Blades. Once all three are revealed, follow the map to a nondescript patch of land nearby. Right before your eyes, a series of glyphs appear on the ground. Select the correct glyphs (Blades, Honor, and Bravery) to activate the hidden Dragonguard Entrance. A trapdoor will appear. Go inside.

Inside the tomb is a single chest, with one item inside: The Wind Scour Sanctuary Map. Leave the tomb and you'll find Kasura waiting outside with two horses. She'll be the first to greet you. Speak with her. She has already explored her tomb, and recovered a map in doing so.

"It appears you were as successful as I. Did your tomb contain anything of note?"
Yes, I found a map to a Dragonguard sanctuary.
"Interesting. I found a similar map, but to a different location. This might be exactly what my former student was hoping for. Will you come with me to the Abbey of Blades?"
But wasn't the abbey destroyed by Mannimarco?
"The damage was largely superficial, though there is still much work to do to fully restore the abbey. My most accomplished student will meet us there. We can give him the maps to both sanctuaries and he can decide on the next course of action."
You're being rather secretive about this former student.
"I think it best if my student introduces himself in his own way. Here, you should carry both maps and present them to him yourself. Come, I acquired horses to speed us on our journey."
Very well. Let's ride to the Abbey of Blades.

Travel on Peri to the Valley. 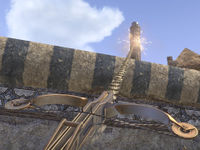 After arriving at the Valley, Kasura will lead you to the Abbey. As you approach the Abbey proper, she'll tell you where to meet her former student.

Kasura: "Follow me, warrior. I find the view from this approach most inspiring. Behold, my home and heart. The Abbey of Blades. Many Blademasters earned their titles on these hallowed grounds. My student waits inside. I think he'll be pleased to receive the maps you carry."

Kasura leads you to none other than Sai Sahan. He is pleased to see you again, rising to meet yet another threat to Tamriel. Once you finish with Sai, return to Kasura to obtain the grappling bow, an ancient Dragonguard tool. Kasura then challenges you to light a brazier up high in the abbey. This segment is intended to teach you how to use the grappling bow. Aim your cursor at a grappling point and fire the bow. You will be pulled wherever you fired.

Grapple to the roof of the training hall and light the brazier. Follow the grapple points with your bow until you reach the top. Light the brazier and jump down to speak with Sai. He'll tell you of the first place to search for weapons against the Dragon threat: a Dragonguard sanctuary known as Wind Scour Temple.

You'll be taken to HoonDing's Watch to find the hidden entrance to the Dragonguard sanctuary. The way is sealed until you light the braziers in the proper order (Ghelin-Brol, Vashu-Pir, Jaiv-Yora, Ettiene Volusus). Light the fires according to their lineage, and a grapple point will appear on the platform. Use your new bow to reach the platform and search the archives for any clues. You'll find a book, Searching for the Horn of Ja'darri, Part 1, in the shelves. Once you've found it, speak with Sai Sahan, who notes that the book contains a clue as to where you should go next. Your next destination is Storm Talon Temple. 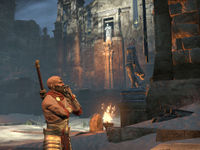 Uncover the secrets of Dragonguard temples

Storm Talon Temple is located under Aphren's Hold. This sanctuary offers its own unique puzzle, a maze. If you fall, the moat below will catch you. Work your way through the maze and reach the Archives, where you'll find Searching for the Horn of Ja'darri, Part 2. This book will spell out your final destination: Dark Water Temple, located in Eastmarch. Speak with Sai Sahan and prepare for your journey.

Dark Water Temple is hidden away in Kynesgrove. This is the most challenging of the trials, as the Horn is located across a chasm that cannot be crossed. However, you'll find a letter from Ilend Balbus providing a hint.

Take the dust of our fallen for and offer it to the altar. As you walk the path of the Dragonguard, may your steps never falter.

After this, a grapple point appears. Use it and search the urn for the Dragonbone powder. Use the powder on the altar and it will reveal a path across the chasm. Follow it to the final archive. When you arrive at the library, you'll find more books, but still no horn. Search the archives for a hint as to the horn's whereabouts, and you'll find its final resting place in another book, Searching for the Horn of Ja'darri, Part 3. The Dragon Vahlokzin stole the horn and stowed it away in his lair. Speak with Sai Sahan once more, and travel back to the Abbey of Blades.

Speak with Kasura about your findings when you arrive. Afterward, speak once more with Sai Sahan, who will reward you for your efforts and tell you about the next step.

This Elder Scrolls Online-related article is a stub. You can help by expanding it.
Retrieved from "https://en.uesp.net/w/index.php?title=Online:The_Dragonguard%27s_Legacy&oldid=2423270"
Categories:
Hidden categories: