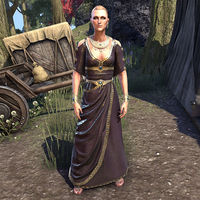 The Impresario is an Imperial event merchant who can be found at the Event Exchange pavilions during a current event and will leave as soon as the event ends.

These Event Exchanges are located near the starting city of each alliance's starting zone, as well the main cities within Chapter zones. Her assistant, Philius Dormier, will always be present at the Events Exchange, and will inform you of The Impressario's presence or absence.

By exchanging Event Tickets with her, you can purchase fragments to summon the Soulfire Dragon Illusion. From 2018 to 2020 she previously sold special indrik feathers which could be used to obtain a special Indrik mount, or Indrik Berries, which evolved the creature. In 2021 the Impresario sold Unstable Morpholith fragments.

The three fragments needed for the Soulfire Dragon Illusion will be available during each event in 2022:

The annual anniversary event runs from 7 April to 19 April 2022. The Impresario will offer bound pages from the Saberkeel Style, the first two fragments of new Aurelic Quasigriff mount, parts for the Aurora Firepot Spider. This is along with an updated list of cake replica furnishings and a grab bag which contains parts from previous Jubilee events.

The following is a list of all the items the Impresario has previously sold this year:

The Jester's Festival 2022 runs from March 31 to April 7, 2022. The Impresario introduced the last fragment needed for the Scales of Akatosh skin as well as bound pages for the Second Seed Style.

Whitestrake's Mayhem is the renamed Midyear Mayhem, and its first 2022 run goes from February 17 to March 1. The event introduces the second fragment needed for the Scales of Akatosh skin, along with Black Drake Clanwrap style pages and the Black Drake Face and Body markings.

The first incarnation of the Daedric War Celebration Event runs from January 20 to February 1. It is also the first event of 2022 and introduces the new fragment set for the year. The first fragment needed for the Scales of Akatosh skin is introduced. The Impresario's stock also features Style Pages from the Evergloam Champion Style set and the Gloam Gryphon Fledgling pet.

She also has unique ambient dialogue which can be heard occasionally while standing near her.

"Only the rarest of mystic goods!"
more?