"After much knowledge-seeking, I learned to summon an illusion of a small, fiery Dragon to follow me. While it's not the same as the real thing, that endears me to it more. Who wants a real Dragon around, after all?"—Ninaleon Sightbinder the First 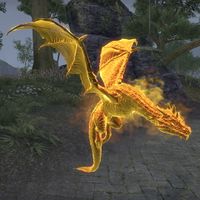 The base fragments and upgrade fragments will be released incrementally throughout 2022 during various events that year. Once the final fragment for a particular upgrade was released, the subsequent event will switch to a new upgrade and the previous fragments are no longer available for purchase. All of these fragments will be made available one last time during the 2022 New Life Festival.

In order to acquire the base Soulfire Dragon Illusion pet, you must take part in several in-game events and buy three magical fragments. Fragments can only be bought with Event Tickets. All three fragments were introduced during the Daedric War Celebration 2022 event.

each. Upgrading the pet removes it from your collections, but it can be re-obtained by collecting the first three fragments again. There will be three upgrades for the base pet.

"Not content to simply bear Akatosh's symbol, some of the Dragon God's most ardent worshipers use magic to adorn their skin with golden scales. Display your devotion to the greatest of the Divines with this resplendent skin!"

Taken from the nest almost as soon as it breaks through its shell, this quasigriff is pampered and preened as befits a creature sacred to Auriel. Its golden feathers are used as fletching by archers in Balfiera.