A map showing the location of The Chain 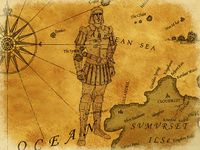 The Chain is a group of at least three islands in the Abecean Sea,[1] south of Hegathe in Hammerfell and west of Stros M'Kai, near the Eltheric Ocean. The two smaller islands trail off to the west.[2] The island was considered by the Empire to be Hammerfell's territory in 2E 864,[3] a claim which remained by the late Third Era, as certain maps be considered them part of Hammerfell.[4]

The coral kingdoms of Thras are described as a set of islands southwest of the Chain.[1]