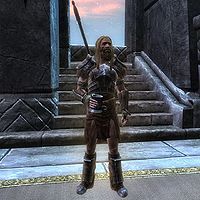 Jylkurfyk was a southern coastal city on Atmora. It was known for its large shipyard and was active in Merethic Era.[1]

Following the events of the Night of Tears and Ysgramor's return to Atmora and before the return of Five Hundred Companions Ysgramor expressed a desire to immediately return to Jylkurfyk to take a ship back to Tamriel to avenge his kin. However, before he returned to Skyrim he codified the written language in Atmora to preserve human history.[2]

Ylgar commissioned two ships for himself and his brother Yngol, the Darumzu and the Harakk, from the local shipyard for Ysgramor's legendary voyage to Skyrim.[1]

Due to an inexplicable shift in the climate of Atmora territories once known as a green, albeit cold land were gradually overcome by "the frost fall" and rendered largely barren and uninhabitable,[3][4][5] becoming a "frozen continent".[6]

Although there is some suggestion that, as of the early Third Era, Atmora was still inhabited,[7] the fate of Jylkurfyk is unknown. It is believed that Atmora no longer supports any civilized life, and those people who did not leave it for Tamriel ultimately succumbed to the ever-worsening climate.[5]