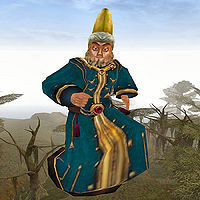 Tarhiel is a Wood Elf enchanter who falls from the sky in the Bitter Coast near Seyda Neen after an experiment goes horribly wrong. He is the proud creator of the Scrolls of Icarian Flight, which fortify Acrobatics by 1000 pts for 7 seconds. In his eagerness to test them, he forgot to take the landing into consideration, with disastrous results.

Tarhiel is wearing an extravagant robe with matching shoes and a Colovian fur helm. He carries an iron sparksword, three Scrolls of Icarian Flight, and up to 17 gold. Aside from his natural resistance to disease and the ability to command animals, he knows no spells.

You can save his life by casting a large-area Slowfall spell on the area where he's falling. There's little reason to do this, however, as you won't be able to get his enchanted sword and scrolls as easily. He isn't very talkative when you save his life; the only thing he will say is "I don't want to talk about it." and immediately end the conversation.