The UESPWiki – Your source for The Elder Scrolls since 1995
< Lore: Factions: W
Jump to: navigation, search
"Charge, o Gryphon Knights,
Fly on and fight our foes!
Charge, o Welkynar,
Take wing with swords and bows!
—Charge of the Welkynar

Welkynars, also known as Welkynar Gryphon Knights and Welkynars of Eton Nir, were a prestigious order of elite Altmer knights who dedicated their lives to protecting the Summerset Isles.[1][2] Based in the city of Cloudrest atop Eton Nir, the Welkynars remained vigilant to answer any urgent calls for aid. This need for quick mobility is what led to the first Welkynars to tame the native gryphons and use them as their mounts. Given the city's central location on the island, and the help of these flying creatures, the Welkynars were able to quickly render aid across the entire realm. While any member of Summerset's governance or military could petition the Wekynars for aid, accepting the petition was at the order's discretion. Between assignments, Welkynars patrolled Summerset for signs of danger, often stopping in cities and collecting information on any potential threats.[1] 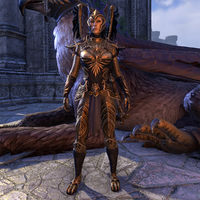 The Welkynars consists of only four members at any one time—a representation of each of the cardinal directions. Typically, each Welkynar takes on an apprentice before they retire. When the Welkynar eventually does either retire or die in the line of duty, their apprentice replaces them. Joining the ranks of the Welkynars was a long and arduous process. Initiates were first required to prove themselves highly capable in battle in order to be eligible. Although the order was well known for producing the finest battlemages within Summerset, magical ability was not necessarily a requirement to join.[1][3]

In addition to battle prowess, initiates were expected to find a wild gryphon egg and raise the hatchling into a fully grown gryphon. The initiate and gryphon hatchling would undergo magical rituals in order to create a supernatural bond between the two, resulting in the gryphon becoming the initiate's personal mount and life-long companion trained to fight by their side. Some claim the gryphon became an extension of the initiate's very being, sharing each other's thoughts, feelings and needs.[4] Indeed, the gryphon itself became the Welkynar's sigil and their affinity and respect for the creature was such that their arms and armor were replete with gryphon symbology and feathers.[3][5]

Around 2E 582 the Welkynars captured a dangerous Sea Sload sorceress named Z'Maja and brought her to Cloudrest. Unbeknownst to the Welkynars, Z'Maja was plotting to capture the city by allowing the Gryphon knights to take her captive and bring her into their home where she could enact her plan.[3][6]

Once within the city walls, Z'Maja escaped confinement and used shadow magics and a Daedric amulet in her possession to enslave three of the four Welkynar knights and capture Cloudrest. With the aid of numerous adventurers, Olorime, the surviving Welkynar knight, fought back against Z'Maja and retook the city. What became of the enslaved Welkynars is debated — some reports claim that she was forced to kill her former comrades who had been reduced to shadow thralls, however other accounts say that they were freed after Z'Maja's defeat.[7]