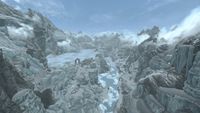 The Forgotten Vale is a secluded region located in the Druadach Mountains, viewed on maps as being within the borders of High Rock and bordering northwestern Skyrim.[1] It is a glacial valley, with icy crevices, forests, a river and a large frozen lake. Its seclusion from the rest of Tamriel has resulted in unique forms of bioluminescent flora and fauna, seemingly adapted for subterranean dwelling. The vale is home to unique species of sabre cat and deer, as well as Frost Giants, shellbugs and the more common Frost Troll. Bar a few rare cases, the Gleamblossom flower and Poison Bloom plant are unique to the region.[2]

The vale is difficult to reach, requiring the navigation through the Darkfall Cave systems to enter from the outside world. It was chosen by the ancient Snow Elves as the site of the Chantry of Auri-El, the civilization's center of worship of Auri-El. The elves built a large sanctum into the mountains, overlooking the valley, as well as five Wayshrines of Auri-El. Magical teleportation in the form of portals were used to navigate and link the area. In order to reach enlightenment and "become one with Auri-El"[3], initiates of the Chantry made a pilgrimage to each of the five Wayshrines, navigating the treacherous vale with a ewer of water to gain access to the temple's inner sanctum. Due to the Chantry's isolation, it remained unaffected by the invasion of the Nords in the Merethic Era. As such, the Snow Elves of the Forgotten Vale had no need of the protection of the Dwarves, who demanded the blinding of the race. Their remaining kin, "the Betrayed", degenerated over the ages into the modern Falmer. Following the disappearance of the Dwarves in 1E 700, the Falmer somehow spread to the vale and began attacking the Chantry. The Chantry was overwhelmed by their sheer numbers, and the final bastion of Snow Elves was wiped out.[4]

Arch-Curate Vyrthur, leader of the Chantry, had been abandoned by Auri-El after becoming infected with vampirism. Embittered, he created a prophecy which would see the darkening of the sun by corrupting Auriel's Bow in order to spite the god.[5] He allied himself with the Falmer and retreated to the inner sanctum, where he awaited his prophecy to come to fruition. His brother, Knight-Paladin Gelebor, was the only other Snow Elf to survive, and retreated into the caves. The Falmer and their tamed chaurus then proceeded to spread throughout the vale unhindered.

The Forgotten Vale was once home to revered twin dragons, Voslaarum and Naaslaarum, who lived beneath the frozen lake. They were most likely killed at some point and resurrected by Alduin upon his return,[6] although it is possible that they survived into modernity.

In 4E 201, the Forgotten Vale was visited by Serana and the Last Dragonborn, who had been guided there by the Elder Scrolls to fulfill Vyrthur's prophecy. They made a pilgrimage to the five Wayshrines to gain access to the inner sanctum in order to save Vyrthur from the Falmer at the request of the mistaken Gelebor. Instead, the two discovered Vyrthur's affliction and betrayal, and killed him. In return, Gelebor gifted them with Auriel's Bow as foretold by the prophecy. The Dragonborn also defeated the dragons Voslaarum and Naaslaarum, and recovered Auriel's Shield from the Falmer.[2]