The UESPWiki – Your source for The Elder Scrolls since 1995
< Lore: Places: M(Redirected from Lore:Haafingar Mountains)
Jump to: navigation, search 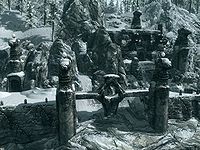 Mount Kilkreath (or Kilkreath Mountain)[1] is a mountain that takes up a majority of the hold of Haafingar, in the province of Skyrim. It is part of the Haafingar Mountains, which extend their soaring peaks across the region, functioning as a protrusion of the Druadach Mountains in the southwest.[2]:418

The large city of Solitude is built along the mountain, on a natural arch that covers the river estuary of the Karth River. There are several caves across the mountain, as well as stone towers, most notably the Solitude Lighthouse and Fort Hraggstad. It descends down to the Karth River and Dragon Bridge. It makes up the provincial border between Skyrim and High Rock, merging into the Druadach Mountains and Forgotten Vale.

The Kilkreath Temple is an ancient Nordic temple dedicated to the Daedric Prince of Infinite Energies, Meridia. The temple was abandoned in the mid-Second Era, and by the Fourth Era, only ruins remained.[3] The exterior of the temple prominently features a large statue of Meridia, and the Steed Stone, one of Skyrim's Standing Stones, can be found higher up on the mountain.[4]