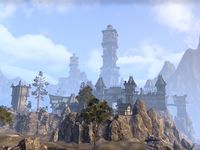 Elinhir, historically known as the "City of Mages", is a town in eastern Hammerfell, close to the border with both Skyrim and Cyrodiil. It is located in the Craglorn region, close to the Skyrim town of Falkreath. Elinhir reached its zenith in the Second Era, when it was considered the center of civilization in Craglorn. As of the Fourth Era, Elinhir is considered a small border town.

Elinhir is the oldest surviving city in Craglorn. It was originally a Nede settlement, as evidenced by the city's tall Apex Towers. According to some legends, it was built by the "Nameless Founder" at the impact site of a great skystone that fell from the sky.[1] The Apex Stone of the Mage, a powerful remnant of the Nedic religion, is located beneath the city. The city was overseen by Governor Pomptinus from 1E 2820 to 1E 2852 as part of the Second Empire, during which time the city sewerworks were constructed.[2] Before the beginning of the Second Era, Elinhir was similar to the rest of Craglorn in that it was settled mainly by those unfit for life inside the Empire, and it was constantly preyed upon by bandits and Iron Orcs.

Early in the Second Era, a group of rogue mages led by Felix "Blackcaster" Augustus arrived at the city after departing from the Mages Guild and attempted to occupy the ruins of the Apex Tower. The mayor refused them, and in retaliation the mages seemingly made a deal with the Iron Orcs so that the latter would besiege the city. In a show of might, the mages drove the Orcs away, and subsequently signed the Apex Accord with the town's leadership. Under this agreement, the mages would protect the town for as long as the people of Elinhir provided support for the operation of their mages' academy.[3]

From these rogue mages grew the Blackcaster Mages Guild, who eventually came to rule over the city. Elinhir still served as a haven for outcasts, but was "civilized" under the strict rule of the mages. Despite being labeled as renegades by the Mages Guild, Elinhir prospered under the mages as their academy grew. This changed in 2E 582, when the constellations fell from the skies above Craglorn. An agent of the Scaled Court made a deal with the mages, offering to unlock the true power of the Nedic devices in their towers in return for the location of the Mage's Apex Stone. The Serpent subsequently corrupted the Stone and gained control of the Mage, who caused chaos in the surrounding region. Atronach guardians, who had been summoned to protect Craglorn from Molag Bal's Dark Anchors, turned rogue, and people were transformed into mindless spellfiends by the massive amounts of magicka permeating the region.[4]

The Blackcaster mages were similarly corrupted when they attempted to cast the Nedic spell. The results were horrendous, and the Blackcasters began to hunt down every mage in Elinhir to steal their magicka, killing many civilians in the process. At their nearby complex of Balamath, the guild also created Air Atronachs from the rogue elementals in an attempt to assemble a Daedric army for the Serpent. The guild's leader, Arch-Mage Yamanu-ko, was driven insane by her lust for power, and Elinhir's surviving population were forced to flee or take refuge in the city sewers. The city's problems were ultimately resolved with the death of Yamanu-ko and the cleansing of the Mage's Apex Stone.[4]

Elinhir during the Imperial Simulacrum

According to an edition of the Pocket Guide to the Empire written in 2E 864, the Redguards of Elinhir had adopted Colovian fashion and taste.[5]

During the Imperial Simulacrum in the late Third Era, the city-state of Elinhir was an active settlement. At the time, it was known as the "Guardian of the West." It was ruled by Queen Fhimke-i, and it had a rivalry with Dragonstar.[6] Elinhir was neighbored by several settlements, including Nimbel Moor to the northwest, Stonedale to the south, and Falkreath to the northeast.[7][8] Elinhir was caught up in the War of Bend'r-mahk, having been claimed by the Nords of Skyrim. Although resistance in Elinhir was feeble at best, there was much more conflict on the border regions in the countryside.[9] At around the same time, the High Prophet of Elinhir, Ayaan-si, assembled the True Crowns of the north and started a rebellion against King Lhotun and the Kingdom of Sentinel to the west. Ayaan-si's efforts had started to pay off when he managed to liberate Totambu from Sentinel.[10]

By 4E 201, Elinhir had evidently declined from its Second Era glory, as it was considered a small town in comparison to Riften.[11]