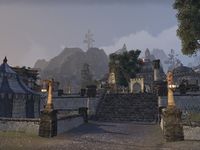 Belkarth Guard during the Imperial Simulacrum

Belkarth (also known as Belkarth Guard) is a town in eastern Hammerfell, located in the center of Lower Craglorn.[1] It is a trading hub for the region due to its location on the highway between High Rock and Cyrodiil, and is notorious for attracting scoundrels and wanderers.[2][3] Despite its multiculturalism, the town possesses typical Redguard architecture.

The ancient Nedic city of Reinhold's Retreat was once located at the site of modern Belkarth. It was already a nearly-forgotten ruin when the Yokudans arrived in Craglorn. Emperor Tarish-Zi heard rumors of great treasure hidden within the abandoned city, and ordered it to be buried beneath the ground when his armies failed to find anything of value.[1]

Belkarth was home to the Star-Gazers, a group of academics who studied the constellations. The organization rose to prominence in 2E 582 following the conclusion of the Planemeld, when the constellations fell to Tamriel above the skies of Craglorn and took on mortal forms as Celestials. These powerful beings were thought to be the result of the experimentation of ancient Nedes, who used nirncrux to harness the power of the stars. However, the Serpent quickly launched an attack on the three Guardian Constellations, hoping to corrupt them and use their power to remake Nirn in his image. The Warrior and the Mage both fell when the Serpent reached their Apex Stones, but the Thief managed to go into hiding by bringing her Apex Stone to Reinhold's Retreat and posing as a mortal named Hara.[1]

Hara appeared in Belkarth and took effective control of the Star-Gazers with her knowledge of the situation. Hoping to find champions to fight back against the Serpent, she sent heralds all across Tamriel to call for the aid of brave heroes and offer transport to Belkarth. Both the Fighters Guild and Mages Guild set up temporary guildhalls at the observatory during this time. With the help of the Vestige, Hara managed to prevent both the Warrior and the Mage from assembling armies, although the Serpent eventually found her Apex Stone, forcing her to reveal her true identity after being rescued from his influence. The news of a Celestial in Belkarth drew the attention of the Undaunted, who helped save the Warrior and the Mage before ultimately defeating the Serpent.[1]

The settlement was still in existence during the Imperial Simulacrum, when it was known as Belkarth Guard. It was ruled by Princess Modka. It had a rivalry with Heldorn Mount.[4] It was neighbored by several settlements, including Cliff Keep to the west, and Dragon Gate to the northwest, Nimbel Moor to the southeast, and Vulkneu Town to the southwest.[5]