This article is about the clan. For the item set, see Winterborn (set). 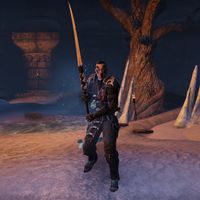 The Winterborn are an ancient clan of Reachmen native to Wrothgar, which was historically a part of the Western Reach. They ruled over Wrothgar during the time of the Longhouse Emperors before being driven off by the Orcs of the Daggerfall Covenant. They recently attempted to retake the territory, but were repelled and now only Urfon Ice-Heart remains to lead them.