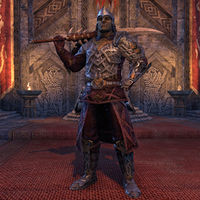 King Kurog, alternatively known as Kurog gro-Orsinium and Kurog gro-Bagrakh, is the King of Wrothgar and rules from Orsinium. He only rules in theory in northern Wrothgar, which is a patchwork of Strongholds, but he does control southern Wrothgar.

Kurog is a controversial ruler, as he joined the Daggerfall Covenant—comprising primarily Redguard and Breton states, which had antagonized the Orcs for centuries. Moreover, Kurog publicly insists that his people worship Trinimac rather than the Daedric Prince Malacath, which fails to convince many other Covenant citizens and makes him unpopular with his people.

This Online-related article is a stub. You can help by expanding it.
Retrieved from "https://en.uesp.net/w/index.php?title=Online:King_Kurog&oldid=2063701"
Categories:
Hidden categories: