Nchuthnkarst is a Dwemer ruin located in Dusktown Cavern in Blackreach: Greymoor Caverns. It contains all manner of exotic enemies which have been transported through time. Kireth Vanos can be found standing outside over the corpse of a Snowblade Stalker.

Nchuthnkarst consists of several sections, all of which contain different enemy types. The ruin itself contains the usual Dwarven fare, along with beasts from Summerset and ancient Nord raiders. Another section emulates the Clockwork City, and contains fabricants. The third section defined below resembles a coastal cavern where yaghra and pirates dwell. The fourth and fifth areas are converged, and have different enemy pools. The fourth region contains creatures from swamps and mountains, and monsters from Elsweyr reside within the fifth.

All enemies have a small chance to drop fragments for the Master Field Cartographer outfit.

Dwarven Sentries, Dwarven Spheres and Dwarven Spiders are present in almost every section in Nchuthnkarst.

There are three achievements associated with this location:

Within the ruin lies traps that knock you over and deal shock damage.

As soon as you step off the lift, you'll find yourself within Nchuthnkarst's Entry Hall. Raynor Vanos is standing in the center of the chamber. You may speak with him during the related quest. Follow the hall to the right and you'll end up in the next portion of the dungeon. There are no enemies in the Entry Hall.

Beyond the Entry Hall lies Nchuthnkarst's Control Room. You, Raynor and Kireth will find a strange man named Thaddeus Cosma standing on a balcony overlooking a spacious cavern. There are no enemies in the Control Room.

Nchuthnkarst Complex can be broken down into several subsections.

The first area you step into when you enter the complex is a Dwarven Ruin, as you'd expect. If you continue west along the path instead of veering north, you'll remain in this section. When you hit your first group of enemies, you'll encounter Snowblade Runecasters, Snowblade Archers, Snowblade Thugs, Dwarven Spheres, and Dwarven Spiders. Welwas, salamanders, Snowblade Strikers, and gryphons are in the next chamber, along with a few patrolling Dwarven Centurions.

This section's champion is in the last chamber to the west before the path heads north. In the eastern end of the hallway, there is a disoriented gryphon surrounded by four Dwarven Sentries. Here, you'll fight Dwarf-light the Destroyer, a powerful Dwarven Sphere that is capable of laying down self-arming mines. The Circuited Half-Shells required for the related quest are in the large machine on the left-hand side of the room, between the gryphon and the champion. Once Dwarf-light has been destroyed, head north into the next section.

In this next section, creatures from the Clockwork City will be transported here through temporal rifts. These creatures include Kagouti Fabricants and Nix-Hound Fabricants. Snowblade Thugs, Snowblade Stalkers, Snowblade Marauders, Snowblade Venombows and Snowblade Runecasters can be found observing the constructs. You'll encounter your first fabricants in the square room, which is the first room you'll have to cross in the Clockwork City-themed gauntlet. The chamber ahead is oblong-shaped, and there is a chest in the northern section of this room.

This section's champion, the Imperfect Iteration, can be found in the northernmost chamber of the public dungeon, which is an open room overlooking a beautiful cavern glowing in golden hues. When you enter that chamber, turn right (south), and you'll find the champion's resting place. The Machined Cogs and Gears needed for the related quest are on the left as you make your way through the center of this chamber. Two Dwarven Centurions guard the way into the hallway leading forward.

A single Dwarven Arquebus lies upon the path into this next section. You'll encounter hostile Pirate Alchemists, Pirate Corsairs, Pirate Swashbucklers and Pirate Wavecasters in the first hallway. Yaghra Larvae, Spewers and Striders will begin to show up in the next few chambers. This area's champion, Shahmar, is present in a large room filled with mushrooms and partially flooded with calm water.

The natural cavern is the large section in the northeastern portion of the map. It is located inside the large, central chamber that you could see from the Control Room. Wamasu are the powerful enemies you'll find here. Voriplasmic Corpses, Durzogs, Durzog Whelps, Frost Trolls, Snowblade Chillrenders, Snowblade Raiders, Troll Rockthrowers, and Bog Blights can be found in the western section of this chamber, leading up to the champion, Brsssp the Behemoth.

The group event is located in the center of Nchuthnkarst Complex. It is in the large structure you can see when you look over the railing into the cavern inside the Nchuthnkarst Control Room. Like all public dungeon group events, completing this fight awards a skill point. The skyshard is also located on this structure. The Dwarven Focusing Scope is located on the western external platform of this same structure. The Lute of Blue Longing is located on a rocky platform near a small glowing mushroom, east of the Clockwork Criterion group event. Chests can spawn beneath the eastern and southern staircases. 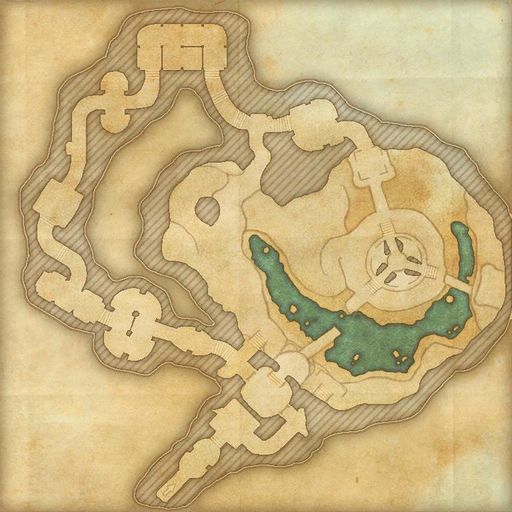