The UESPWiki – Your source for The Elder Scrolls since 1995
< Elder Scrolls Online: Places: Blackwood / Forts
Jump to: navigation, search

Xynaa's Sanctuary is a Daedric fortress in the Ashen Forest of the Deadlands. It is the stronghold of Xynaa, a Dremora who acted as a mentor for Sombren.

Xynaa's Sanctuary can be divided into two sections, the upper level and the larger dungeon beneath.

After speaking with Xynaa, she will lead your group into the Processional Hall. Another Nightmare Firestalker Cub can be found here. Not much is seen of this larger room as she promptly betrays you, sending you and Sombren the Spidernest below, while keeping Destron and Calia.

Where you and Sombren are sent, the large square room is filled with the bones of previous victims. There are two doors, the unopenable door to the Cellar and the door leading to the Maze to the east.

Not really a maze, more of a junction point, as there are three doors leading from this small room. The unusable door labled "Xynaa's Sanctuary: Forgotten Chamber" leads to the Cellar. The door to the west goes back to the Spidernest, while the door to the east goes to the Spiders' Larder.

A few Dremora and a backpack can be found in this room.

This square room is dominated by the massive opened egg sac in the ceiling, ringed by hanging cocoons of bodies. The door to the east leads to the Gauntlet.

A long hallway which leads to the Spiders' Den. Timed fire grates and a fire wall guard the hallway.

The Spiders' Den has a door leading to the Crematorium to the west.

This small room appears to be where the dead a disposed of. In the middle of the room are some fire grates which must be passed to reach the Treasure Chamber.

The treasure chamber is where Xynaa keeps some of her trophies. Menthyx's Skull can be found in the chest located in the southwest corner of the room. Several crates and sacks can be searched here. The door to the south leads back to the Maze. This room is also labelled "Xynaa's Sanctuary: Forgotten Chamber" if you attempt to access it via the one-way door within the Maze.

The Cellar becomes accessible from the Spidernest once you have Menthyx's Skull. It is a large room that contains severals containers to loot. At the northern end of the room, it splits into two hallways where Fire Atronachs will be floating around. These hallways will reconverge outside the door leading to Xynaa's Sanctuary. Xynaa's Book of Contracts can be found to the left of the door. During the quest, Sombren will be waiting for you here.

Sharing the same name with the location itself, this room is where Xynaa can be confronted while she is in the middle of draining Calia and Destron. In the back of the room, three Daedra statues are seen, during your fight with Xynaa she will turn them to flesh and fight you with them. Once you have defeated her, Calia and Destron will create a portal back to Gideon. 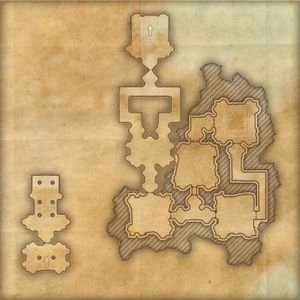