The Ayleid doorway on this natural cave is something of a puzzle for scholars of the Wild Elves. Did they use it as a storage cavern, or were their plans for finishing it in the usual manner simply interrupted? 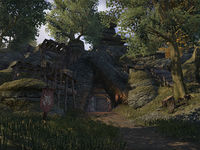 Breakneck Cave is a cave in western Cyrodiil, southwest of Fort Ash, inhabited by the Black Daggers. If the bandits and the spiders see each other, they will fight to the death. Ore veins and jewelry seams can be found within the cave.

The northern chamber consists of living quarters for the bandits. A chest can be found beneath the scaffolding that towers above the north side of the dock. To the west lies Hegris the Black Dagger's room. To the east lies a dead end tunnel. 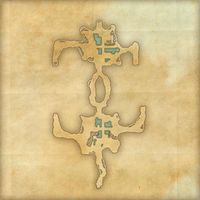 A map of Breakneck Cave