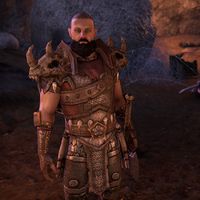 Praxin Douare is a Breton member of the Fighters Guild and one the few remaining sane persons that was part of the original expedition that went into Spindleclutch I. After the party defeats the Swarm Mother, Praxin and his soldiers suddenly go insane and attack them, forcing the party to slay them. This event reveals the true nature of the Whisperer and the threat she poses. 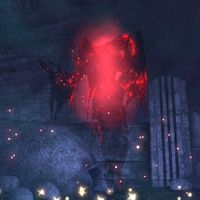 Praxin Douare is encountered again as a Wraith in Spindleclutch II, where he serves as the second boss. He is later raised as a deranged ghost by a coven of Vampires who took over the cave following the Whisperer's death. He believes he is still ensnared by the Whisperer. At first, he will be a ghostly version of his former self, but during the course of the fight, he will change into a wraith.

If you're a member of the Fighters Guild [verification needed — see talk page] Praxin will ask:

"Did the Fighters Guild send you? Has word reached the guild hall?"

And if you're not a member of the Covenant, he'll say:

"You're not from the Covenant. What are you doing here? It makes no difference. We need all the help we can get."
What's going on here?
"We made a terrible mistake. We thought we were clearing out a simple spider infestation, but it's far worse.
The whispers … they never stop. It's maddening! We got out, but our commander, Guardian Sud-Hareem, is still in there. "
What can I do?
"My fighters are exhausted, but if you push into the caves and clear out the spiders, we'll use fire to destroy their eggs. If Guardian Sud-Hareem is still alive, we need ot find him.
Just don't listen to the whispers. They'll drive you mad."
All right, let's get moving.

As he leads his team out, he will say:

Praxin Douare: "On your feet, you louts! We're going back in."

When he is spoken to in the spider area:

"We must press on. We'll burn these foul eggs after you clear out the spiders."

After the Swarm Mother is dealt with, the Fighters Guild members will become more agitated. Praxin orders his soldiers to burn the egg sacs.

As you approach the large door the Swarm Mother was guarding, Glathut mentions that she has a headache.

Glathut: "My head is pounding. I wonder if we'll ever see the commander again?"
Praxin Douare: "We'll get through this. Don't let the whispers get inside your head. Fill it with pleasant thoughts."

When they enter the tunnels, it becomes clear that the soldiers may succumb to the whispers.

Praxin Douare: "The whispers grow louder! We must hurry."
Praxin Douare: "My head's pounding. Hard to think."
<The group runs down the passage and dies.> 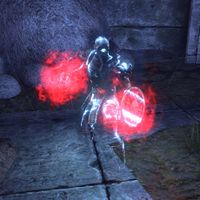 While searching for his friends and son, Guardian Sud-Hareem will encounter the spirit of Praxin Douare who intially seems confused about what is happening.

During combat, he will comment as he summons spectral versions of the bosses from the previous version of the dungeon. While reliving his experiences, he will become increasingly upset:

After defeating the spectral Whisperer, he will transform into a wraith:

Praxin Douare: "I'm not alone you know. The others, they keep me company. I feel them coming now."

As the players enter the chamber, a scene between Sud-Hareem, Mereel and Praxin will play. Praxin cannot be attacked before the conversation ends.

In this phase, Praxin stays in his humanoid form and doesn't attack directly. Although he can be attacked, he takes greatly reduced damage, and thus players should focus on the adds only. He summons four waves of ghostly Nightmare creatures to attack the party. These creatures are considered undead, and are thus especially vulnerable to Fighters Guild abilities. The waves consist of

Wave 1
A large number of Spider Swarms appear.
Wave 2
Some Spider Swarms and the Swarm Mother Nightmare appear.
Wave 3
A group of Corrupted Infantry Nightmares led by The Widow-Maker Nightmare and the Big Rabbu Nightmare appear.
Wave 4
Two Corrupted Healer Nightmares and The Whisperer Nightmare appear. This section of the fight can be challenging as there is a fixed amount of time given to kill each wave before the next spawns. If players take too long, they risk being overrun by the various waves. Players should note that after the fourth wave spawns, Praxin himself will attack once the time is up. Thus, the DPS should have a mix of AOE and single-target abilities to make this phase easier. Tanks should taunt the named elite creatures as they do more damage.

After the adds have been dealt with, Praxin will turn into a wraith and attack. In this form, he takes normal damage, and players should focus on him once they kill any remaining adds. As a boss type creature, Praxin is immune to all forms of crowd control effects. As an undead creature, Praxin is especially vulnerable to Fighters Guild abilities.

Distorted Bolt
A basic ranged attack that does high magical damage. If taunted, the boss will be forced to use this attack on the tank only.

Despair
Praxin releases three red lines that travel along the ground. The lines will be released in the direction he is facing, and is telegraphed by his arms glowing red. Each line does high magical damage, and thus the tank should face the boss away from the rest of the party to reduce the chance of them being hit. A simple way to avoid this attack is to ensure that you are behind or beside the boss when this attack is performed.

A red ring will surround a random player and stun them briefly. Once formed, the ring starts to move. The player inside must move along with the ring staying in the center, as any player that touches the ring will be instantly killed, along with the player standing inside the ring. The ring will dissipate by itself after a while. Players should note that attempting to leave the ring via rolling, Teleport Strike or other skills before the spell ends will result in death. Additionally, summoned Familiars will also trigger the ring, resulting in the center player's death.[verification needed — Winged Twilight and Storm Atronach do, confirmation for others needed]

Praxin points at a random player and a rune appears on their body. This spell will drain all three resources over time, making it especially difficult for DPS/healers who may find themselves unable to use abilities. Heavy attacks or potions can help the player recover lost magicka or stamina.